Artists have often sought to learn from artists from previous generations and to more fully understand their practice by making copies or interpretations of seminal works. In previous educational models this was an accepted form of training, students where often seen copying works in the Louvre in Paris or in the National Gallery in London. Beyond formal art education, well known artists have also made copies of works of artists from previous generations (and in some cases their peers). Van Gough made many copies of the work of Millet, considering these works to be similar to that of a musician’s interpretation of a composer’s score. Picasso made a large number of studies of Velasquez’s ‘Las Meninas’. Andy Warhol and Marcel Duchamp both made versions of Leonardo da Vinci’s ‘Mona Lisa’. The Canadian photographer Jeff Wall has made work after the Japanese painter and printmaker Hokusai. In 2005’s ‘Seven Easy Pieces’ Marina Abramovic reenacts a series of seminal performance works from the 1960’s and 70’s made by her peers including Joseph Beuys, Vito Acconci, VALIE EXPORT, Gina Pane and Bruce Nauman.
This act of copying or reinterpretation is also prevalent in other art forms, sometimes to aid understanding but often as a homage to an artist or a work that has been important to another artists development. Within the world of cinema the remake is prevalent. Jean-Luc Godard’s 1960 film ‘Breathless’ was remade in 1983 by Jim McBride. The 1960 American Western ‘The Magnificent Seven’ directed by John Sturges was remade in 2016 by Antoine Fuqua, however Sturges’ ‘The Magnificent Seven’ was itself a remake of Akira Kurosawa’s 1954 ‘Seven Samurai’ set in Japan.
In the music industry the cover version has been around for a long time and is again a way of paying homage to great songs and often important musicians, or sometimes uses the sentiment of a song to reflect certain attributes of the new singer as in Sid Viscous’ cover version of Frank Sinatra’s ‘My Way’. Bob Dylan’s double album ‘Self Portrait’ presents a complete album of cover versions.
Gertrude Stein discusses the potential learning through remaking in ‘The Autobiography of Alice B Toklas’: “You cannot tell what a book is until you type it or proof-read it. It then does something to you that only reading never can do.”
Whilst Walter Benjamin further extends this sentiment in his text ‘Chinese Curios’:
“The power of a country road is different when one is walking along it from when one is flying over it by airplane. In the same way, the power of a text is different when it is read from when it is copied out. The airplane passenger sees only how the road pushes through the landscape, how it unfolds according to the same laws as the terrain surrounding it. Only he who walks the road on foot learns of the power it commands… Only the copied text commands the soul of him who is occupied with it, whereas the mere reader never discovers the new aspects of his inner self that are opened by the text, that road cut through the interior jungle forever closing behind it: because the reader follows the movement of his mind in the free flight of day-dreaming, whereas the copier submits to its command.”
For the past four years students on the Foundation course at the British Higher School of Art and Design in Moscow have been asked to research a particular aspect of fine art practice and through this research to identify a seminal work which they will remake. They carry out this research as groups of three to four students during the first week of the fine art pathway. The students are given three days to put research and prepare a pecha kucha presentation about an aspect of fine art practice (video, performance, collaboration, drawing etc.) that they will deliver to the rest of the group and to also remake a seminal work from their research for a group exhibition. This exhibition at blip blip blip is a selection from the cover versions that students have made in response to this project over the past four years. The catalogue provides documentary photographs of these student cover versions but also explores through short interviews what the students learned through remaking the work of the artist that they chose and how this experience has influenced their subsequent study. 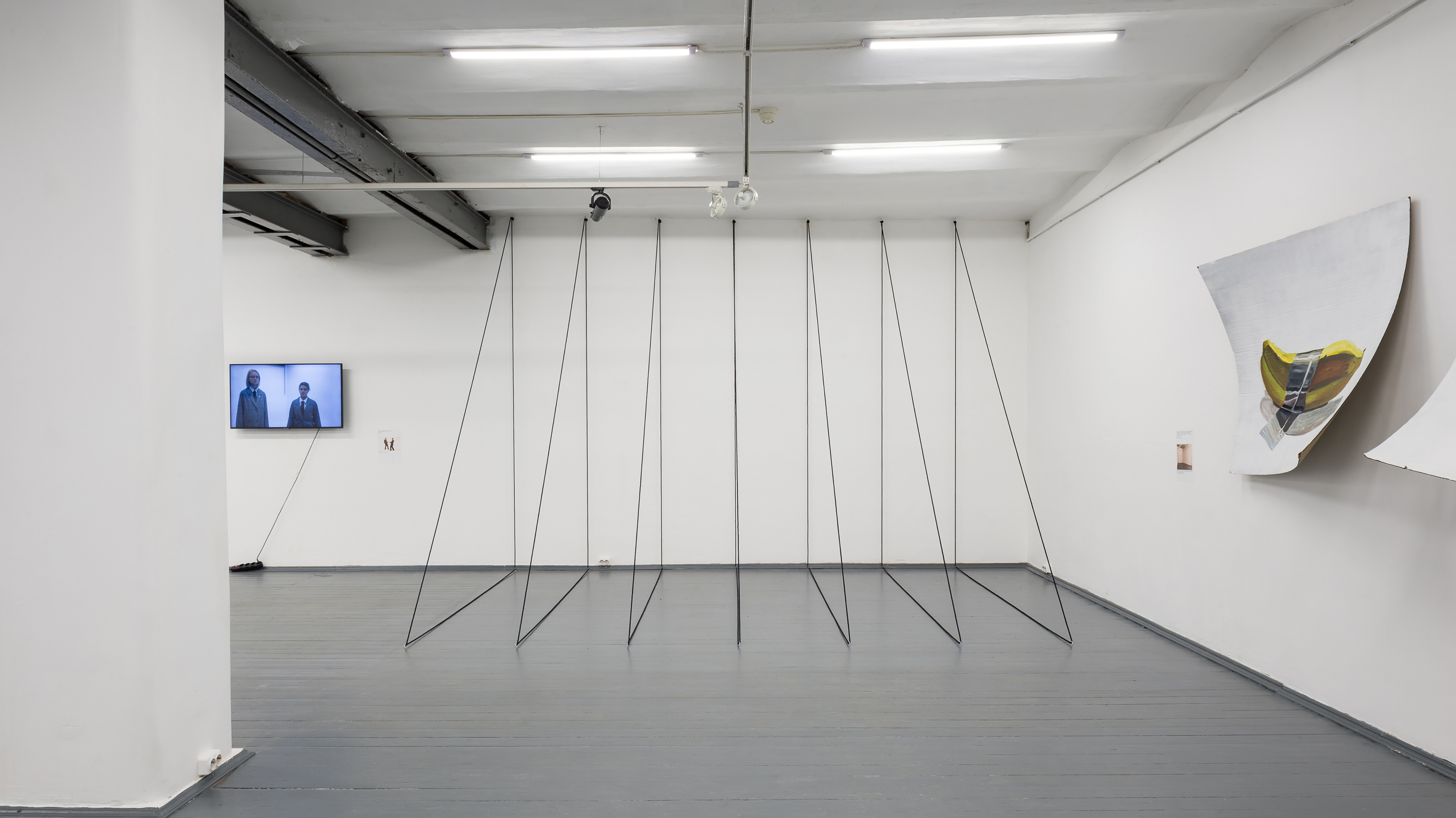 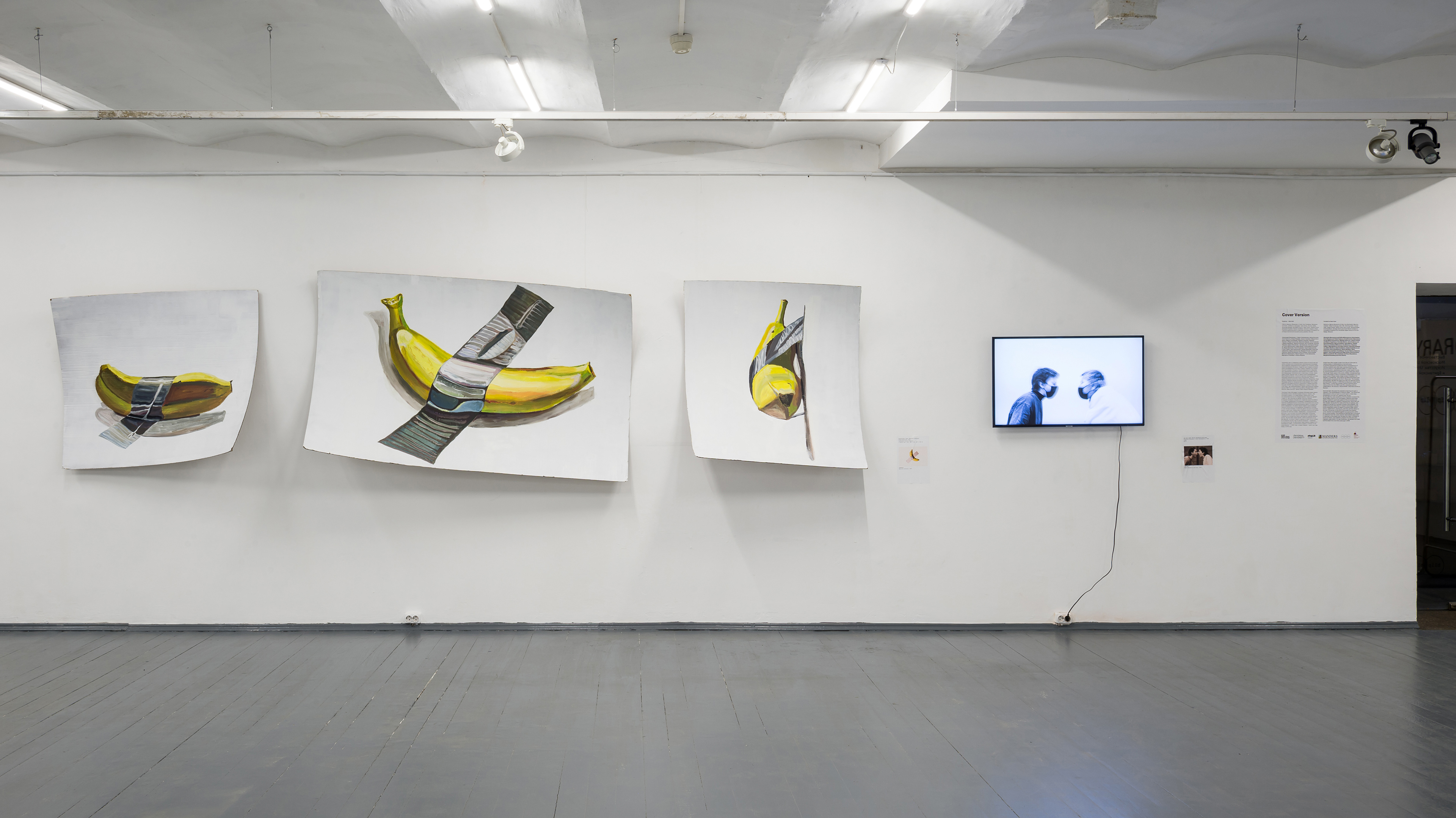 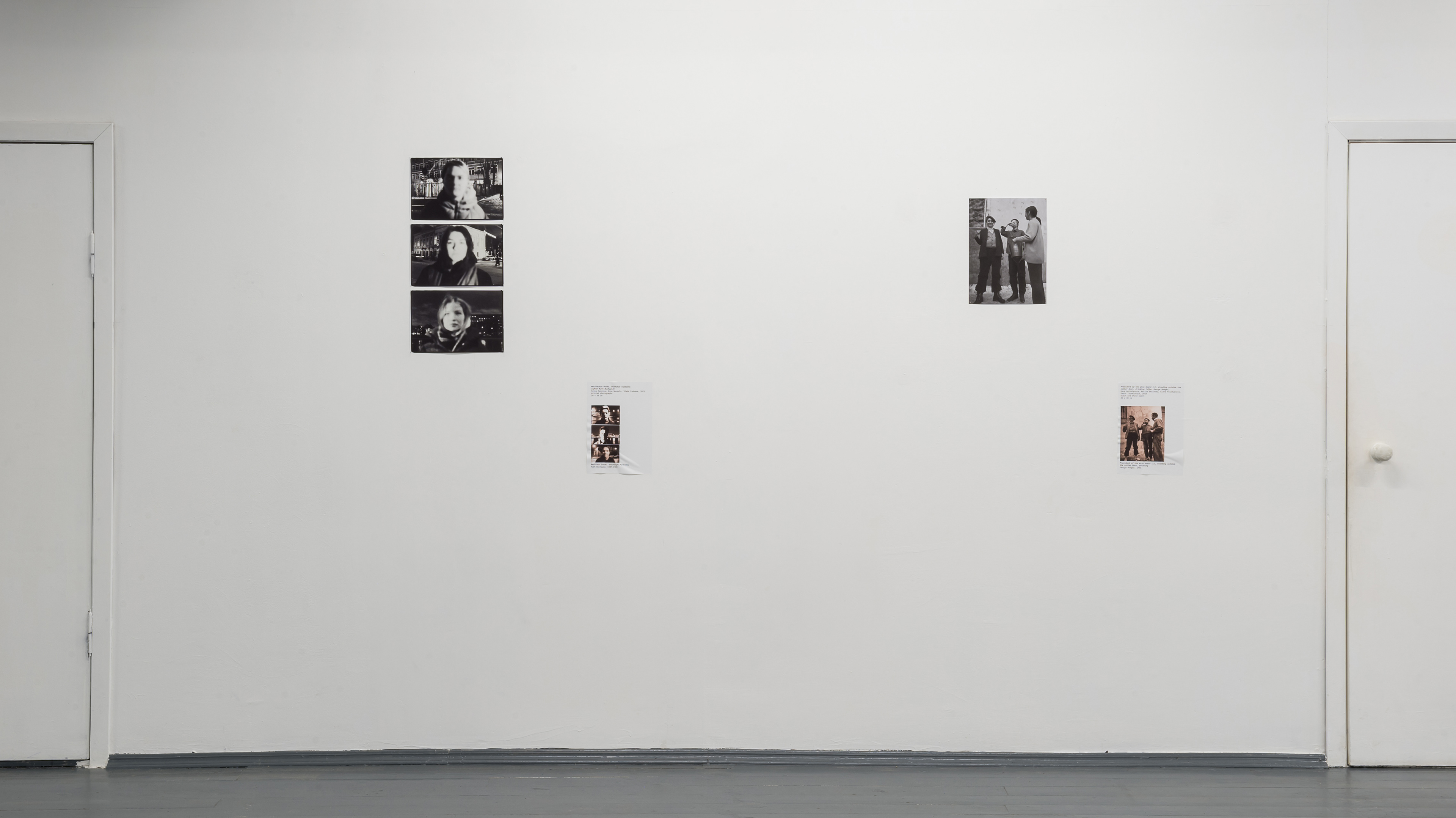 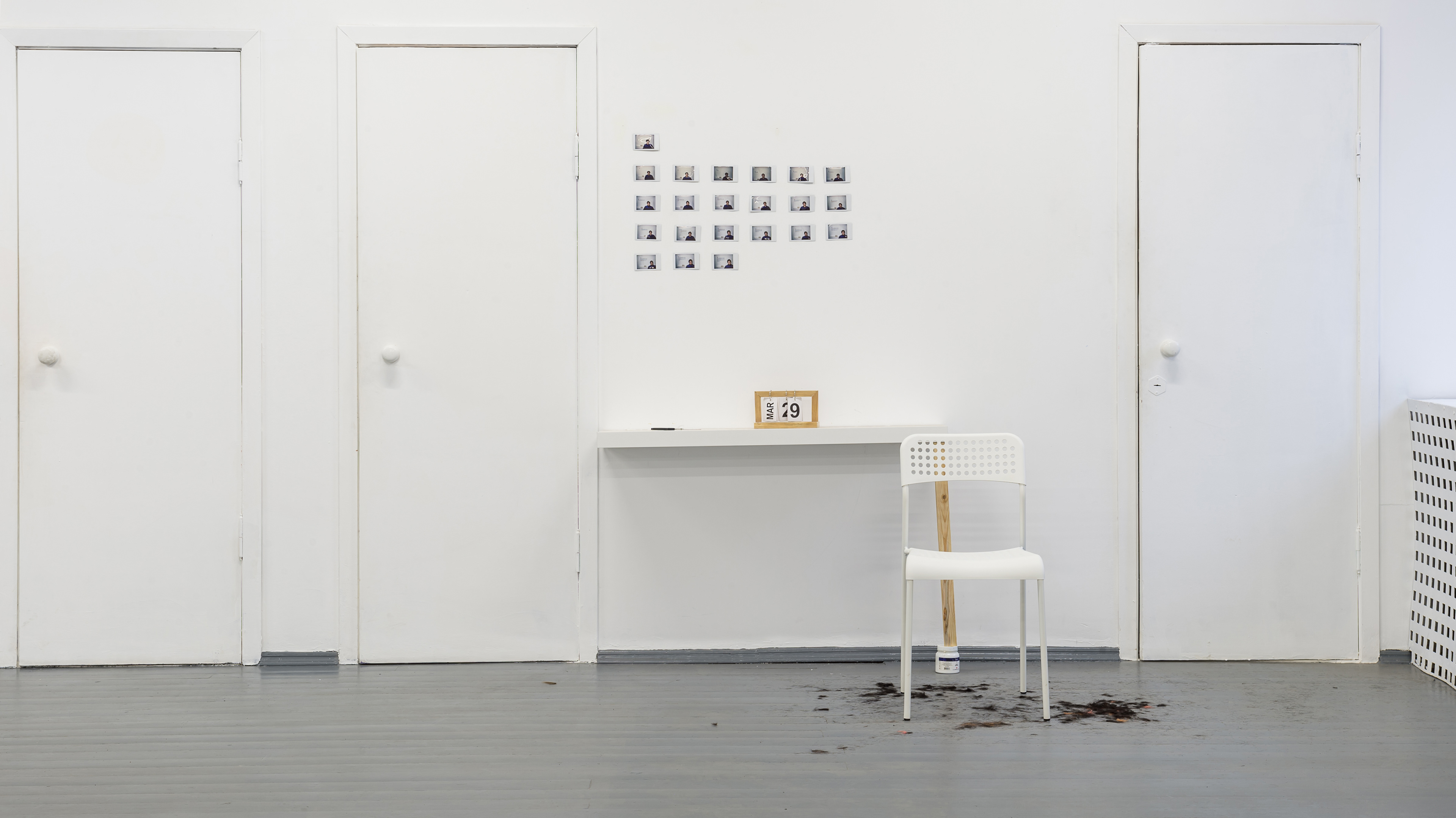 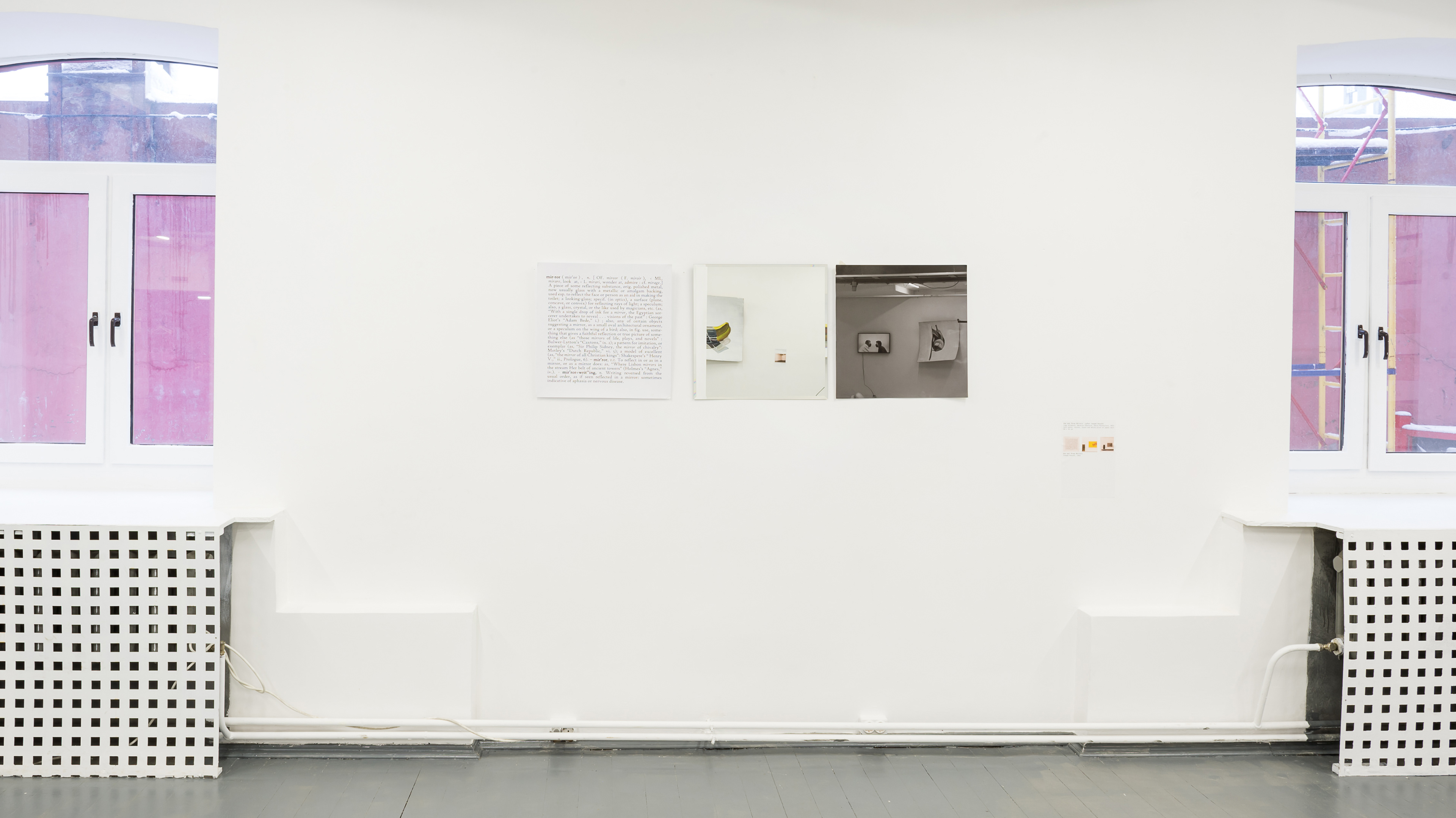 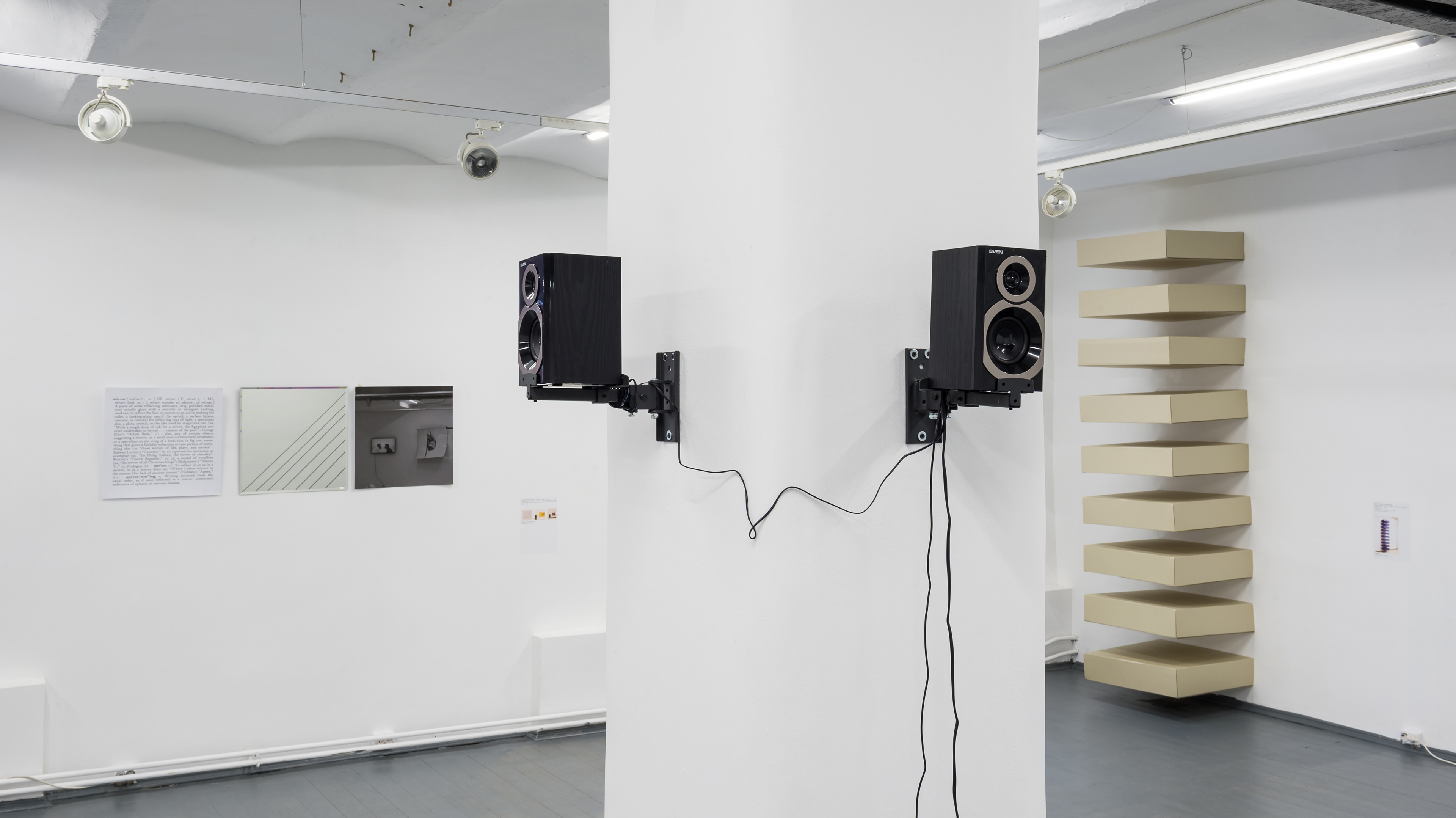 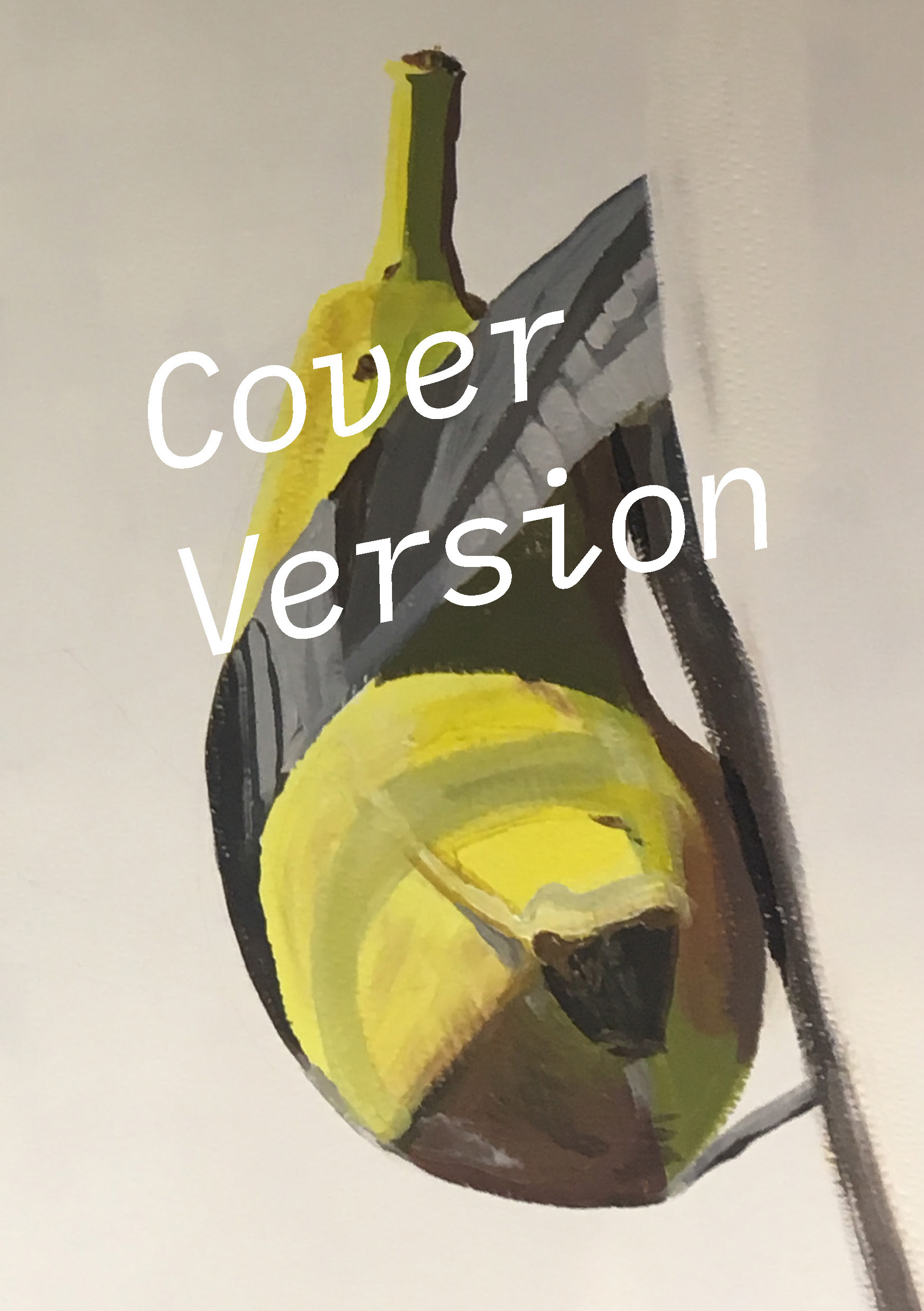 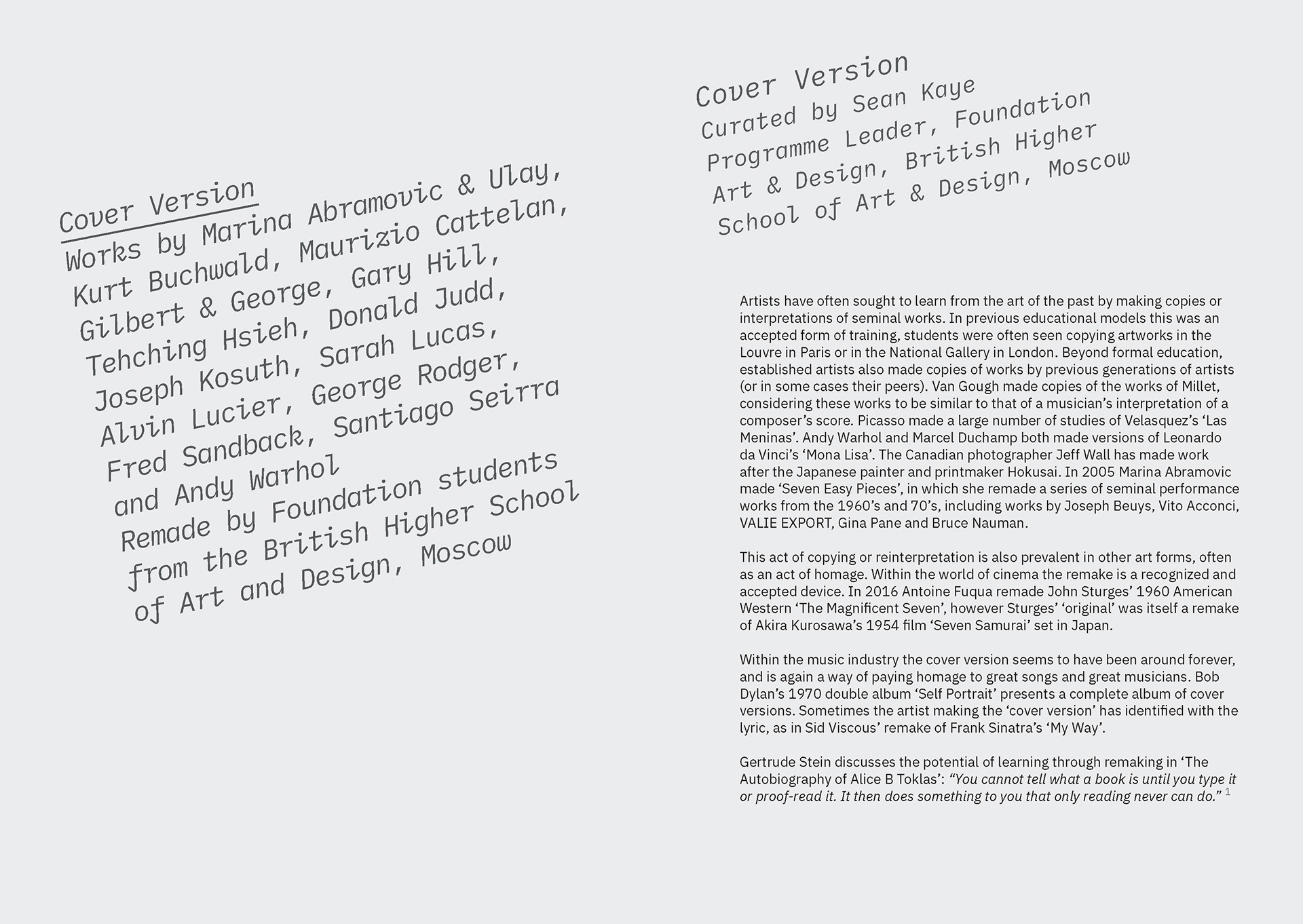 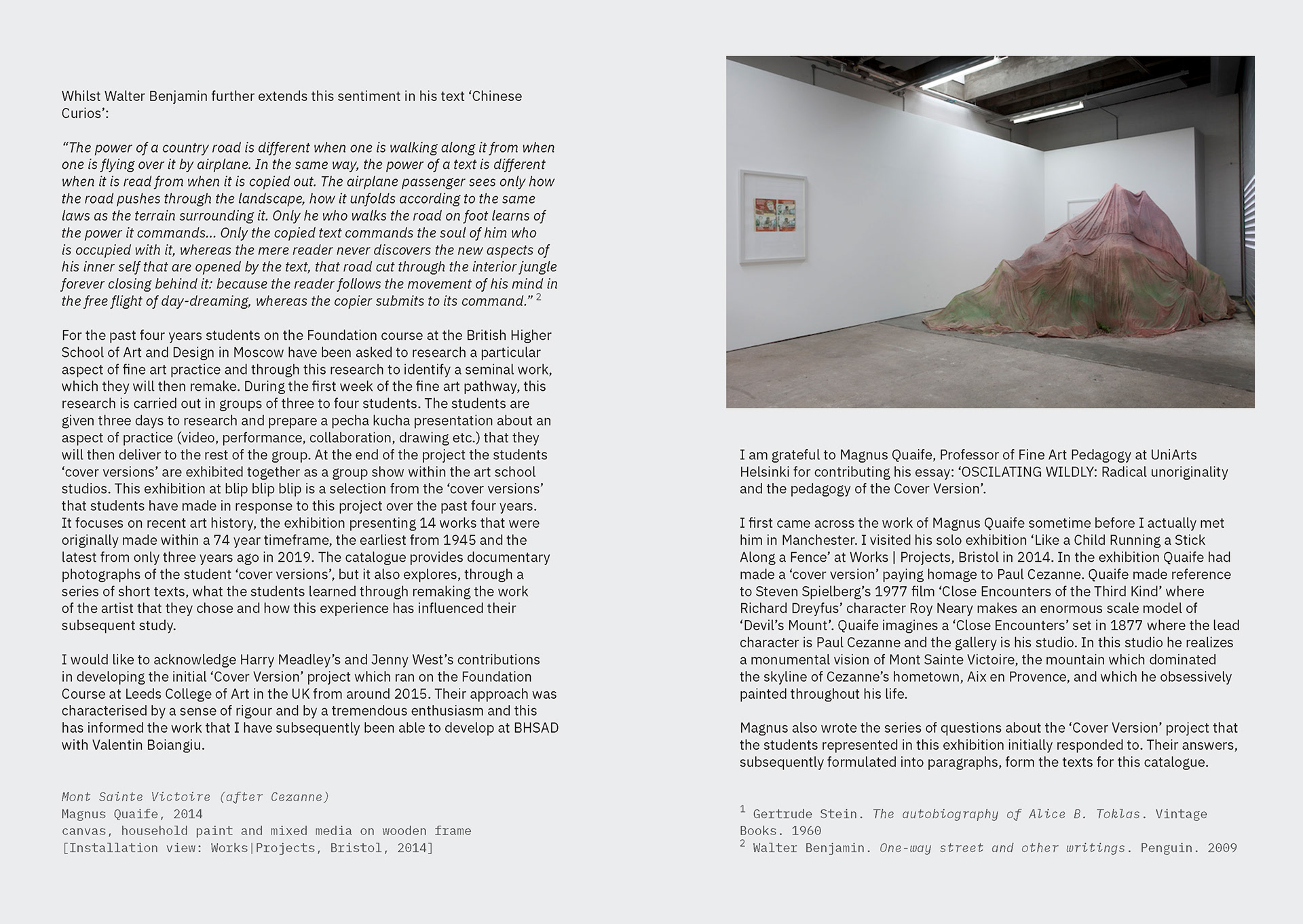 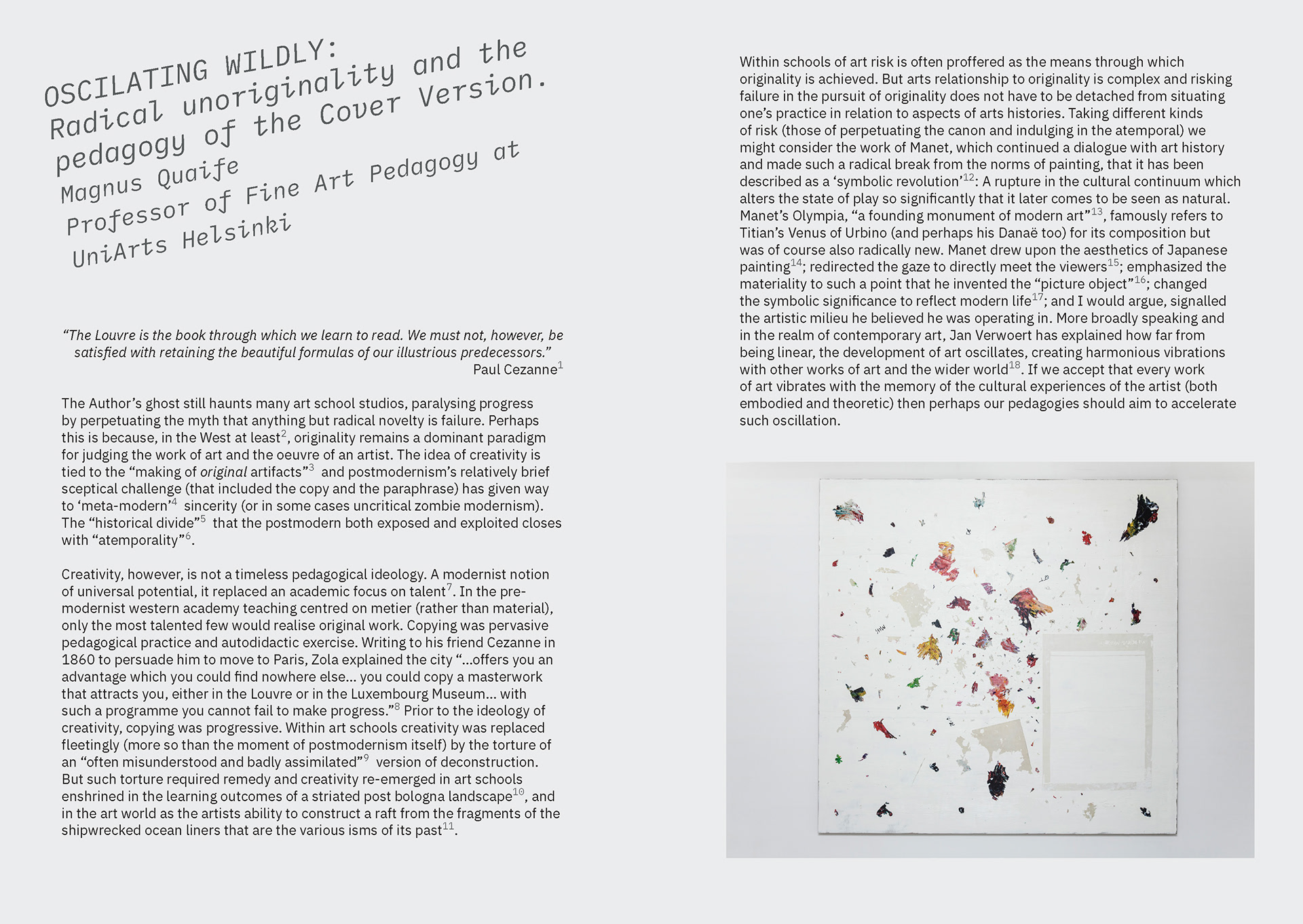 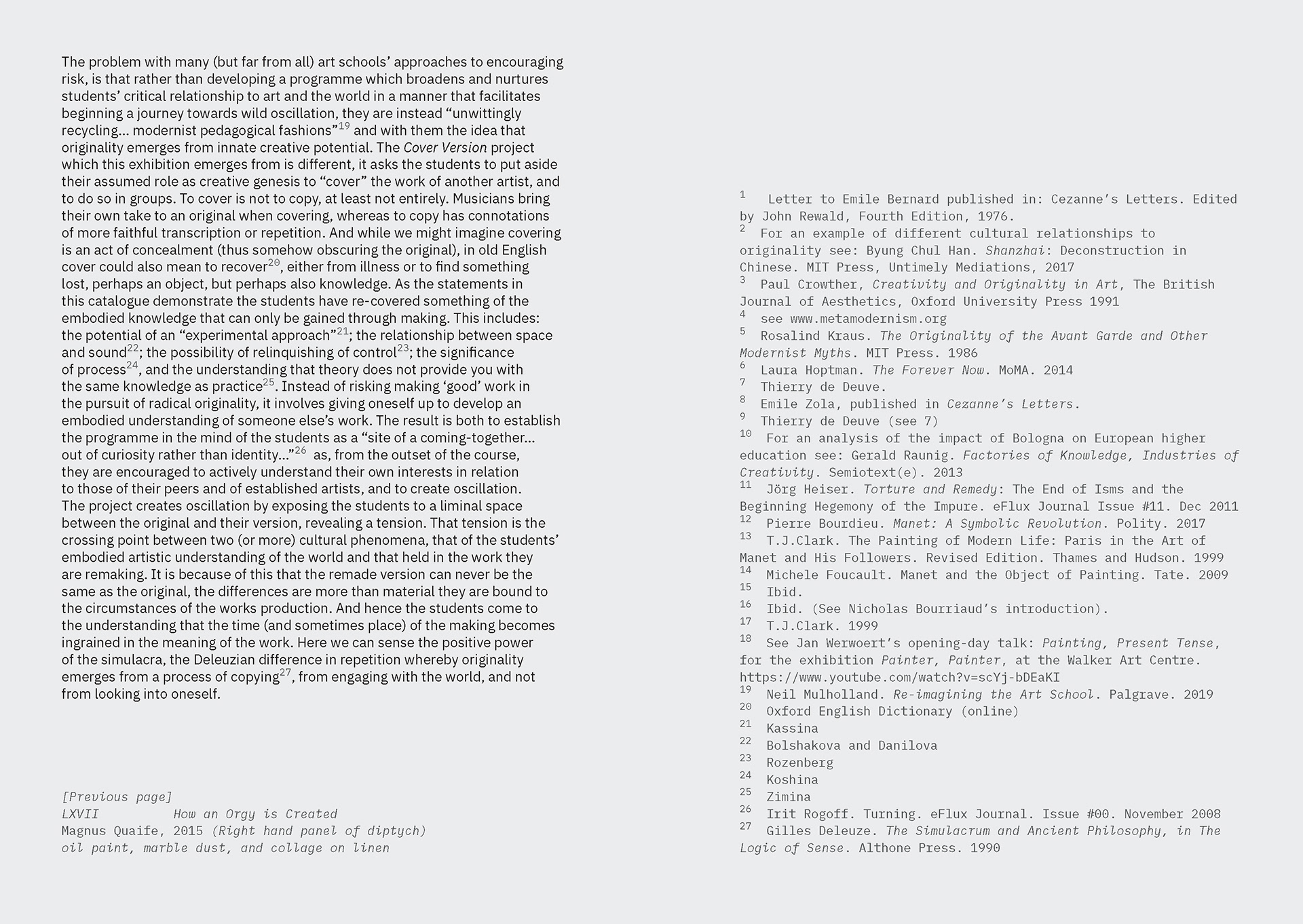 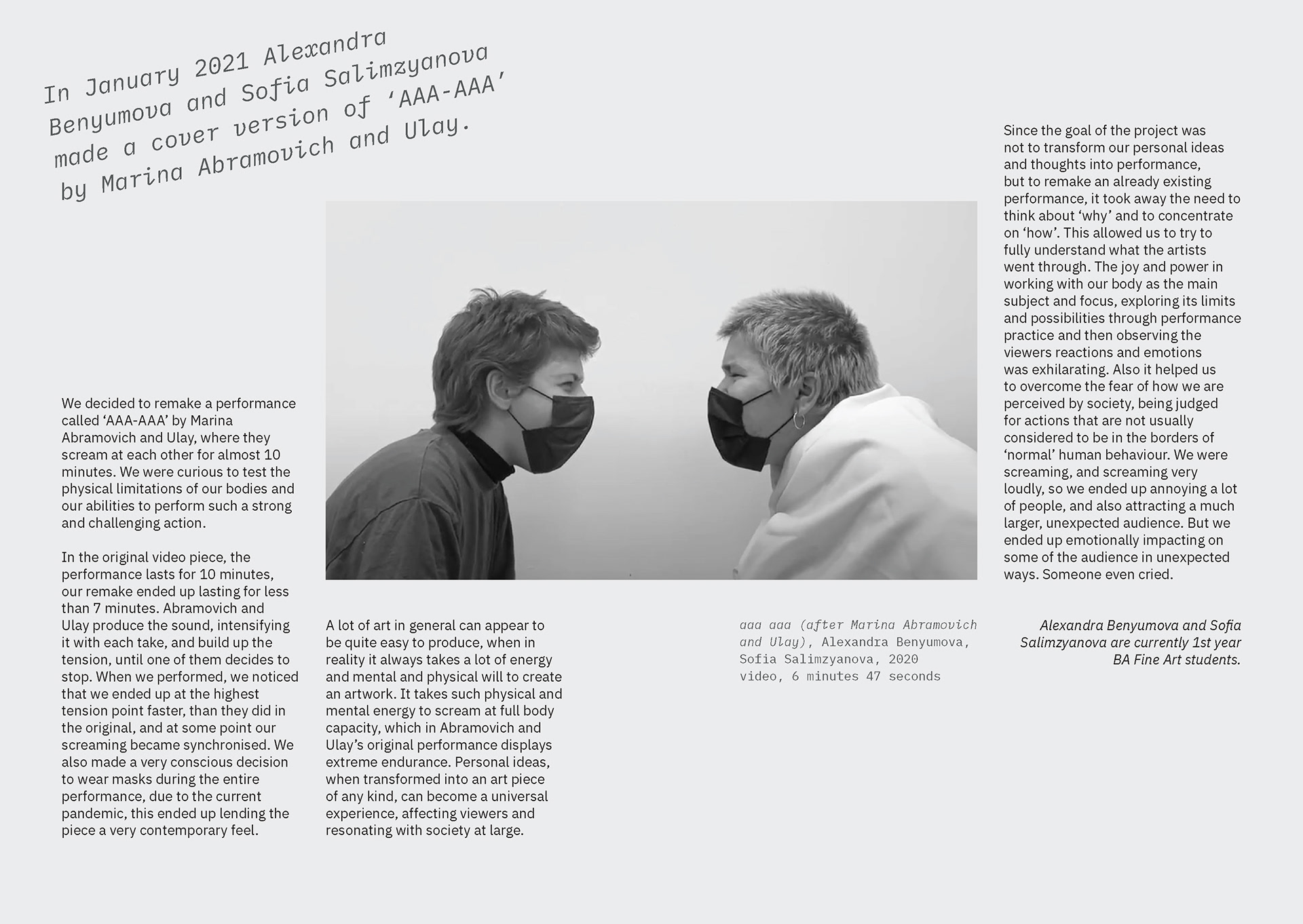 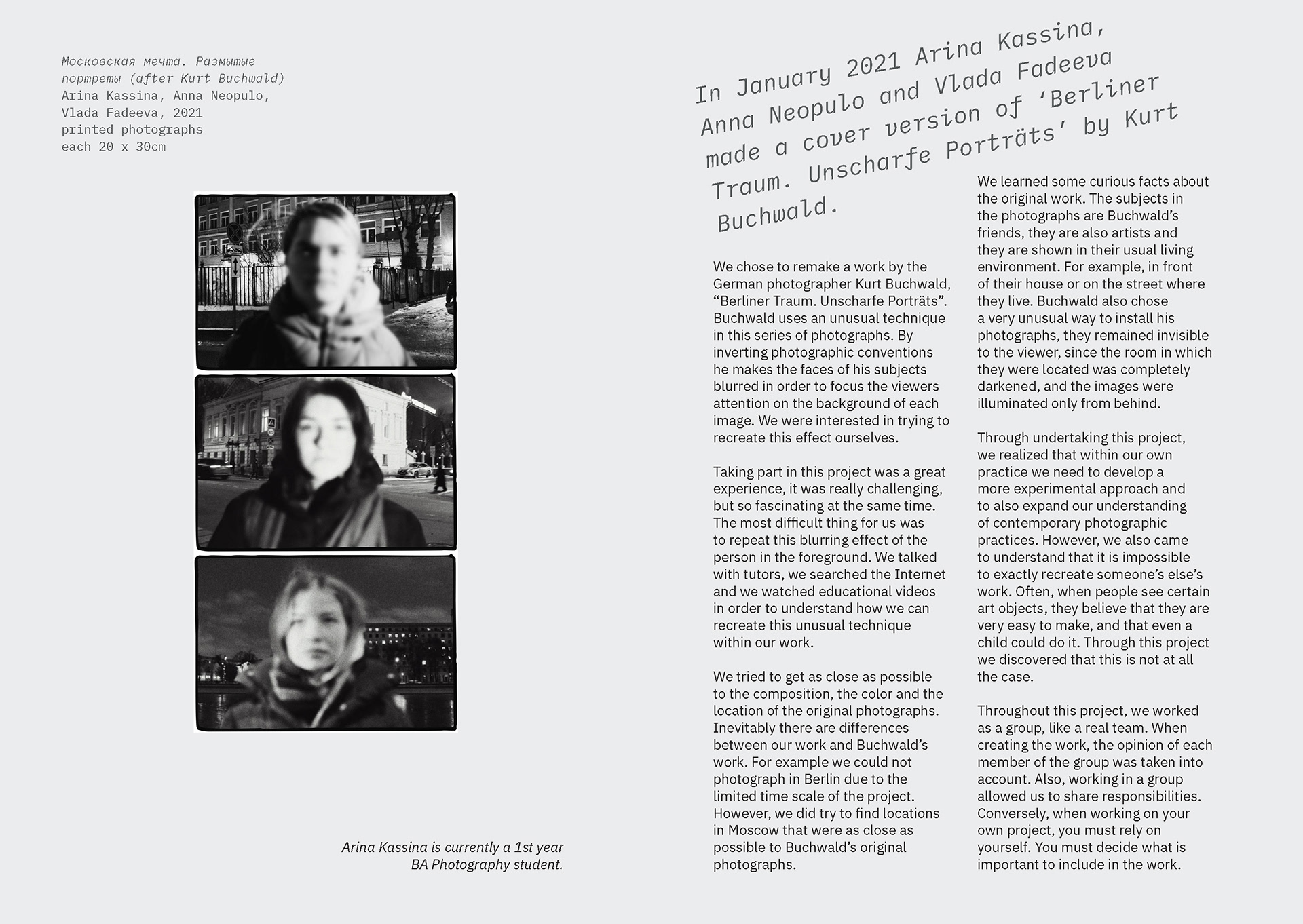 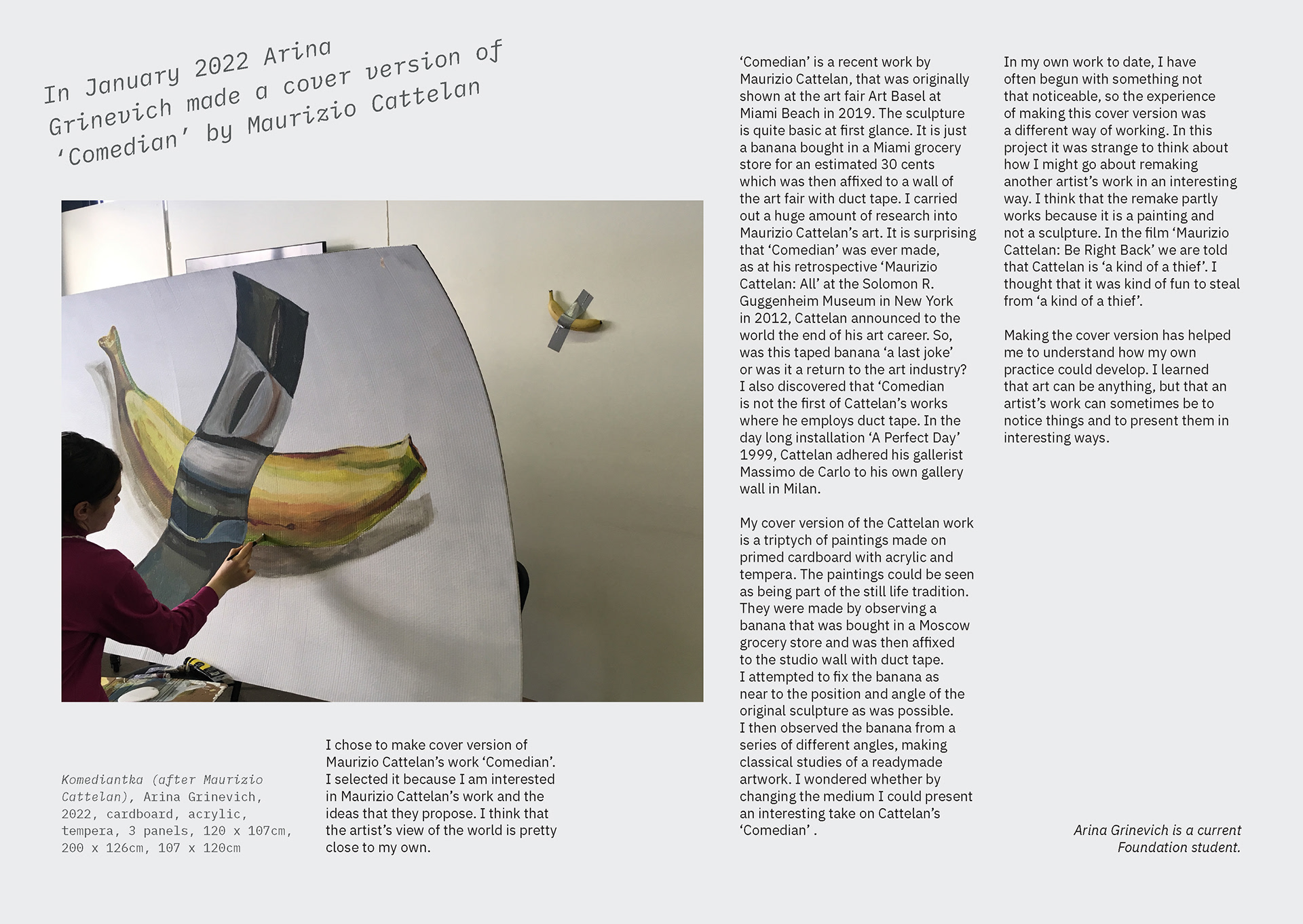 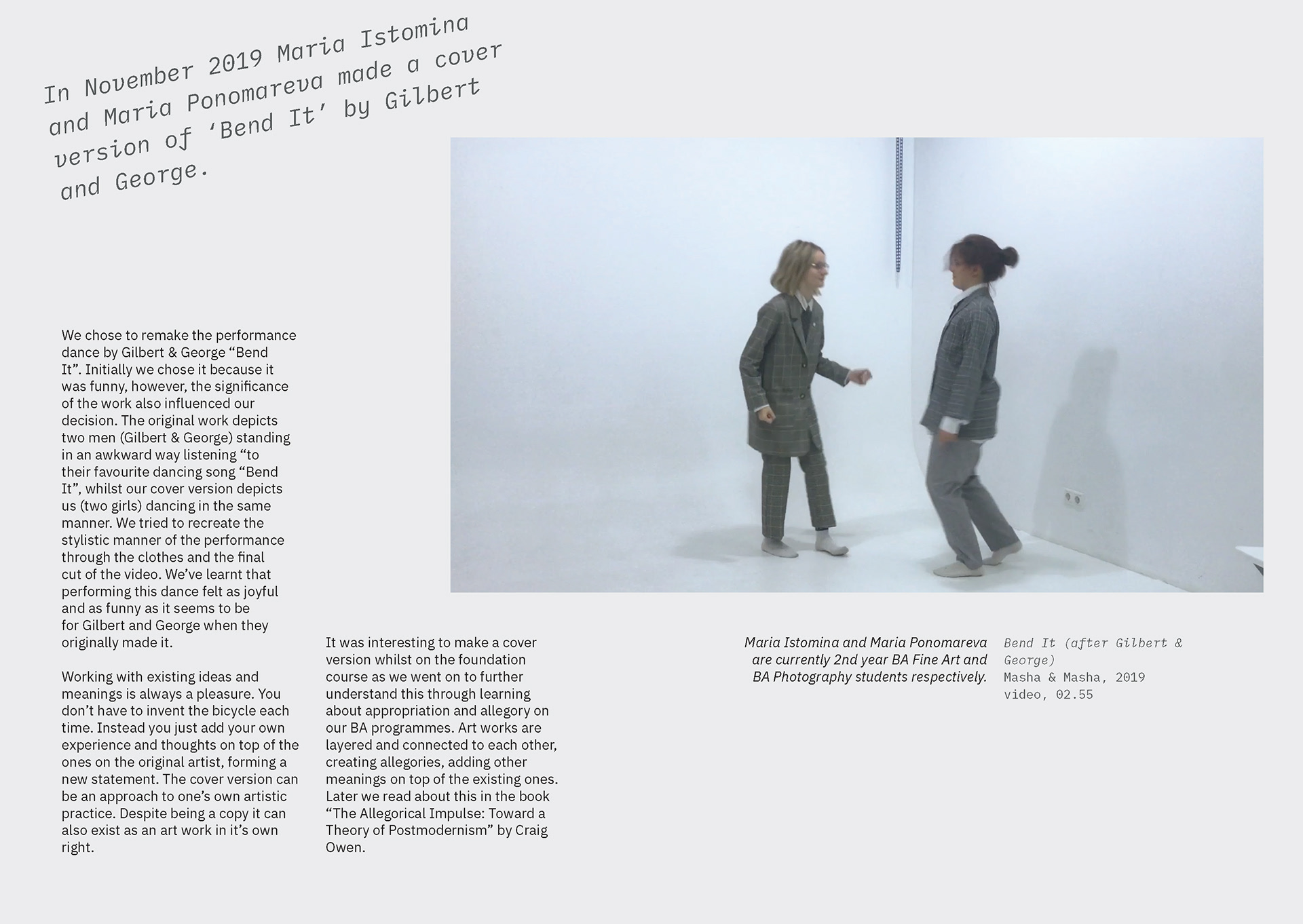 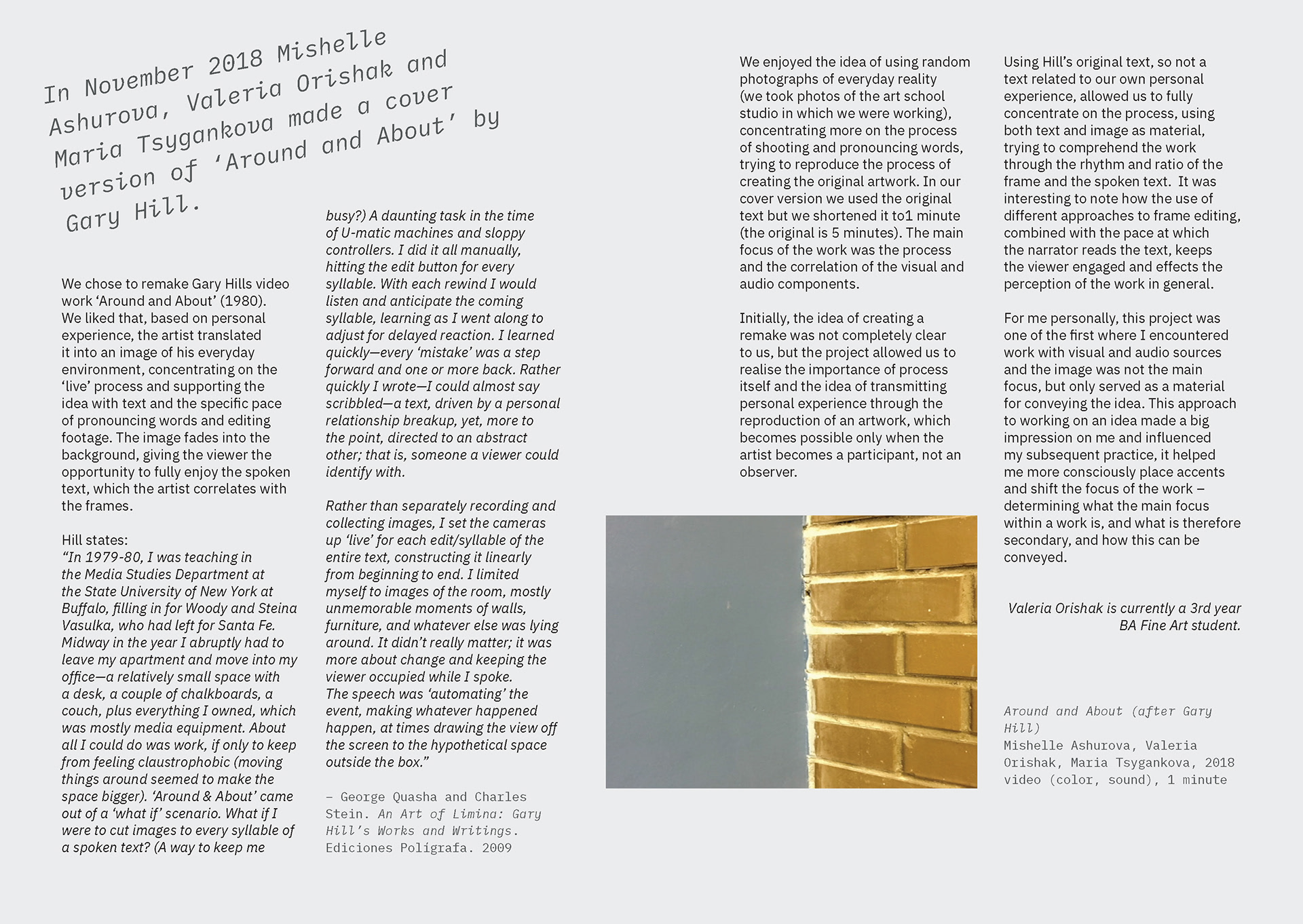 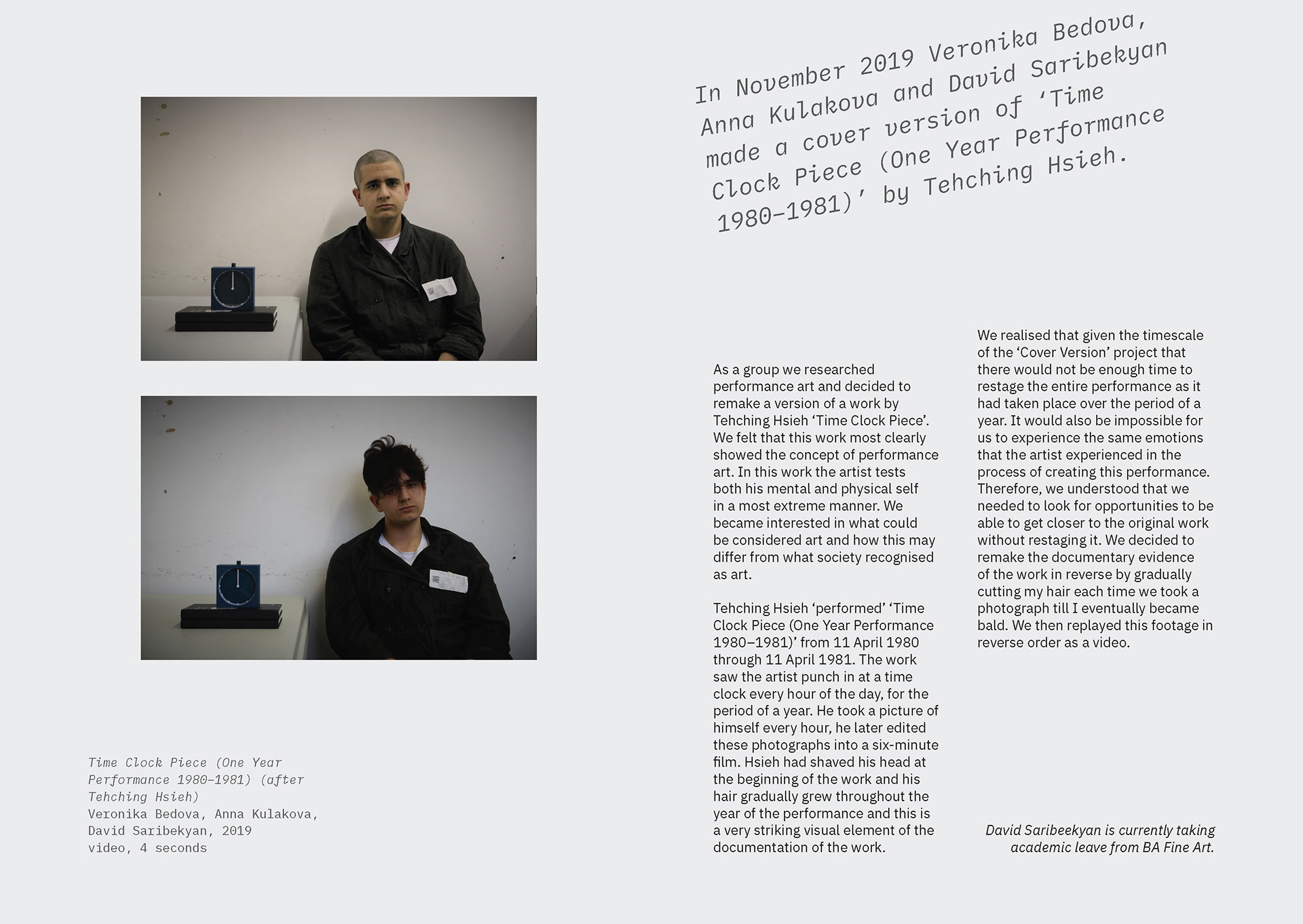 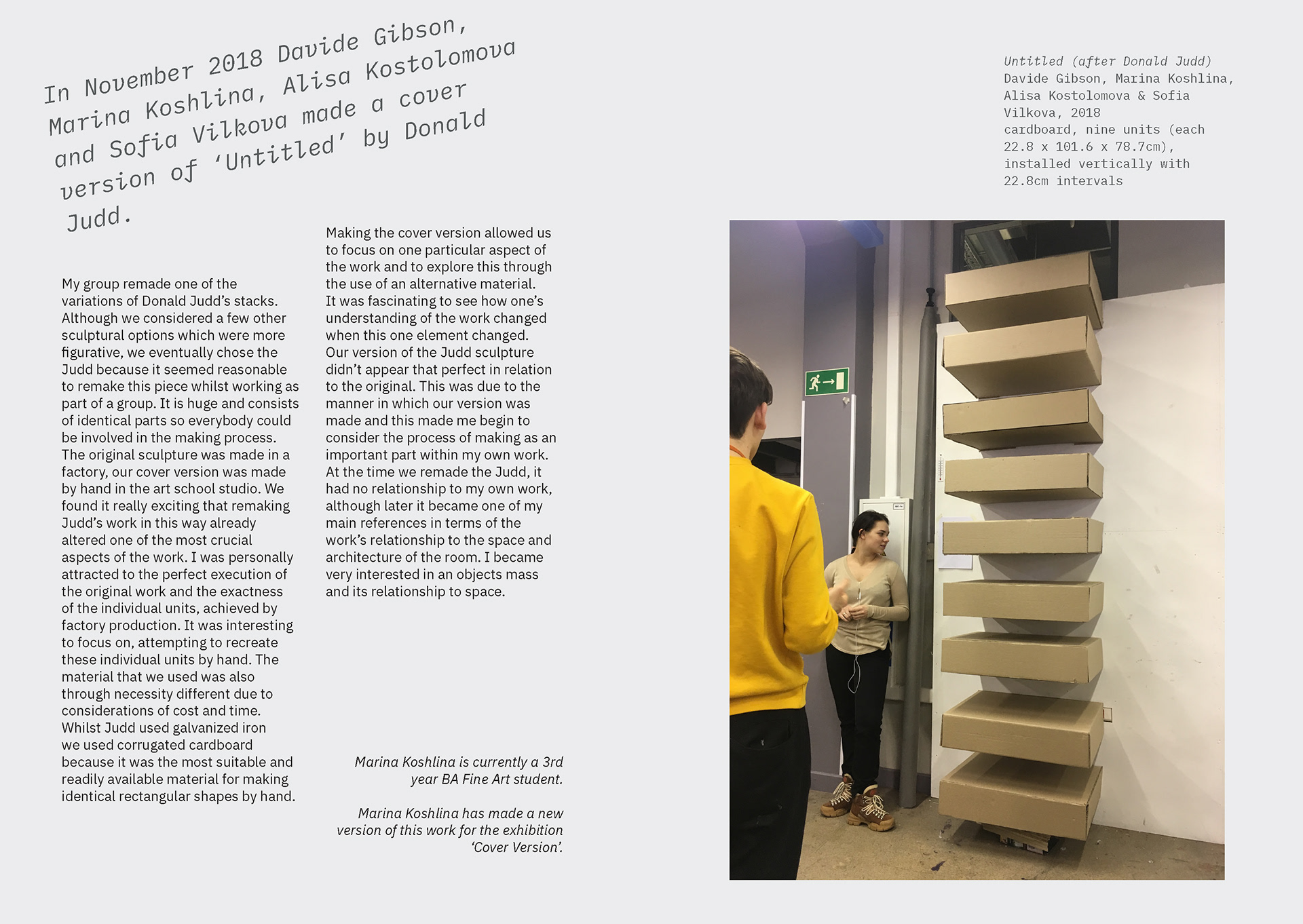 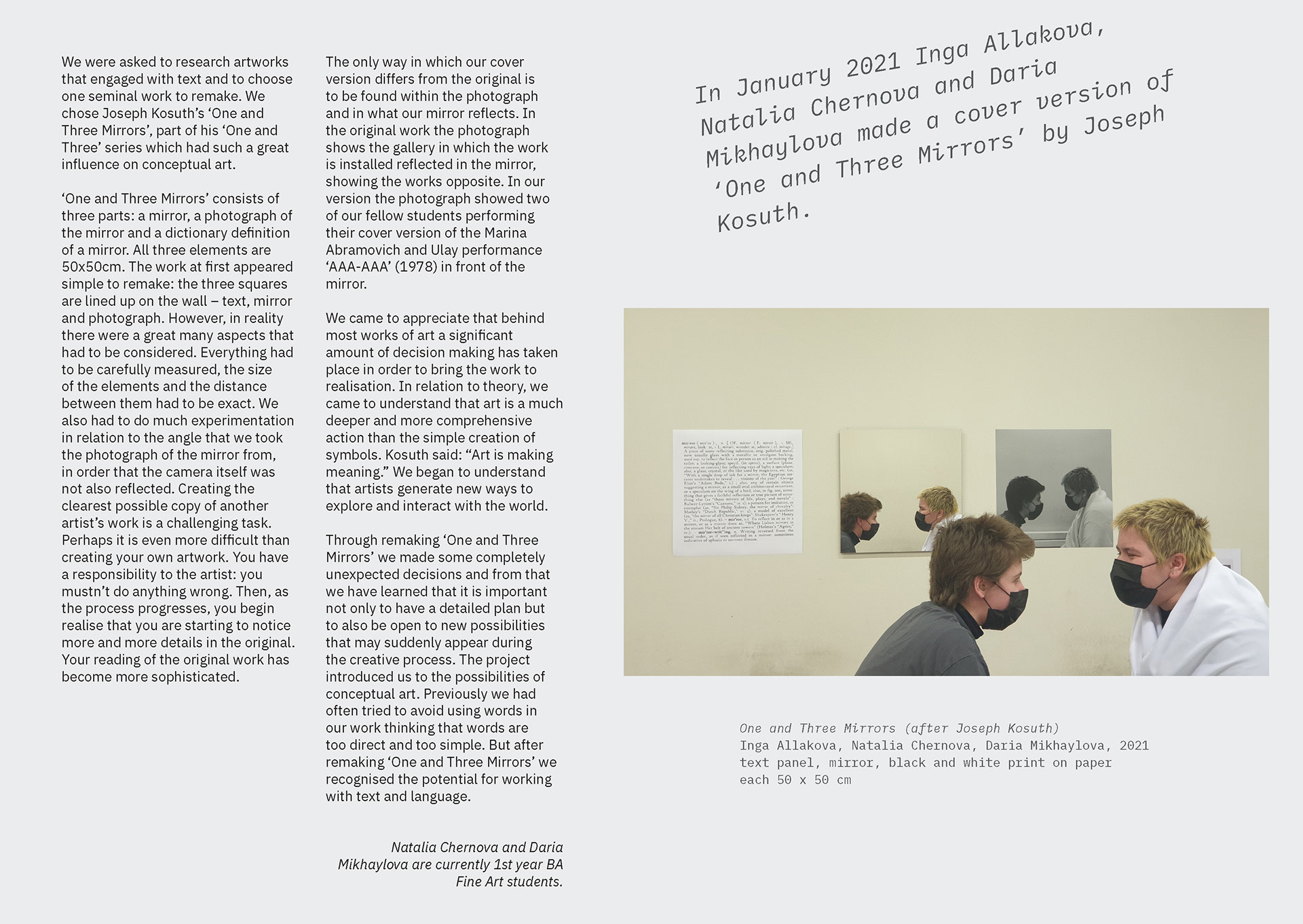 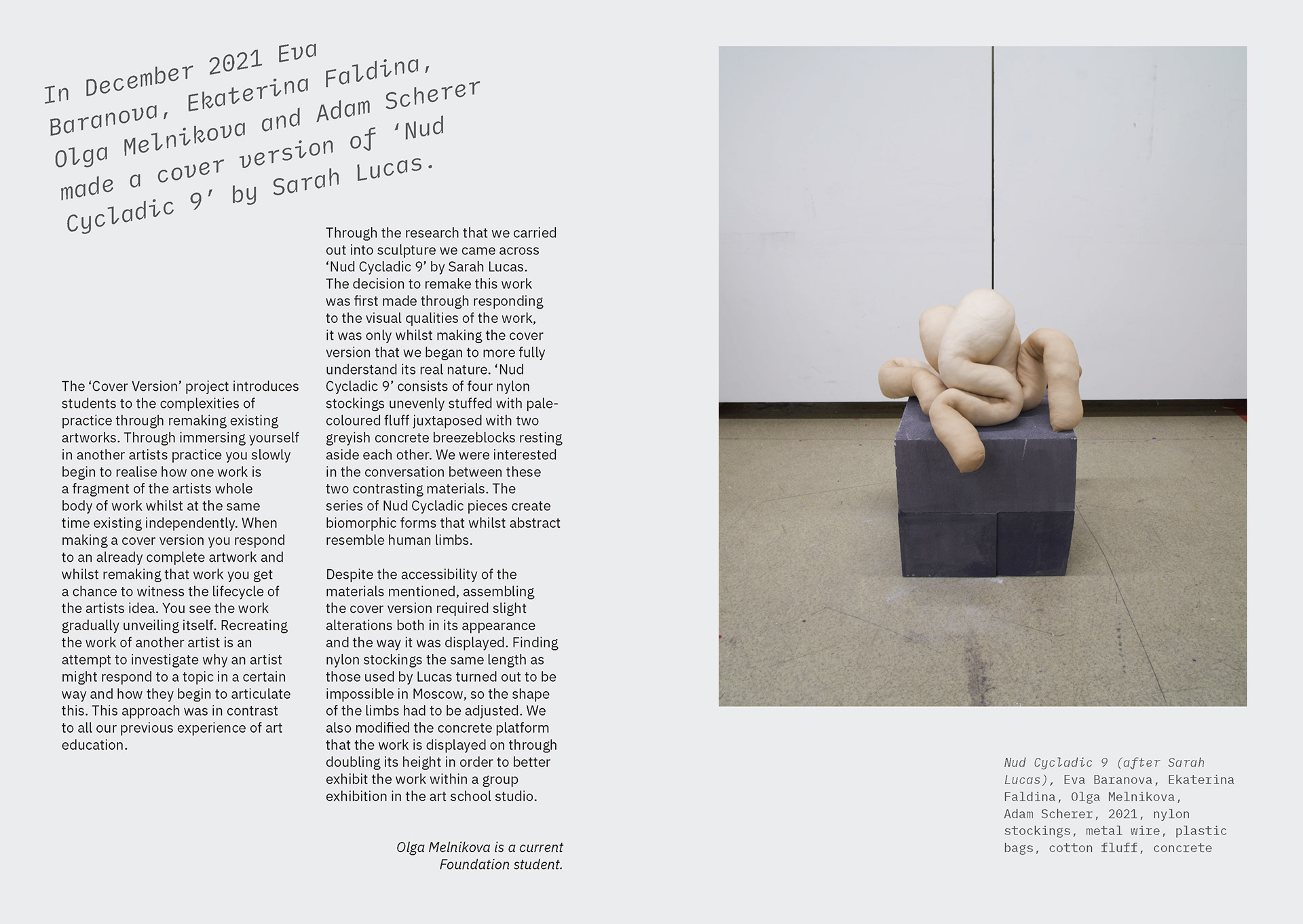 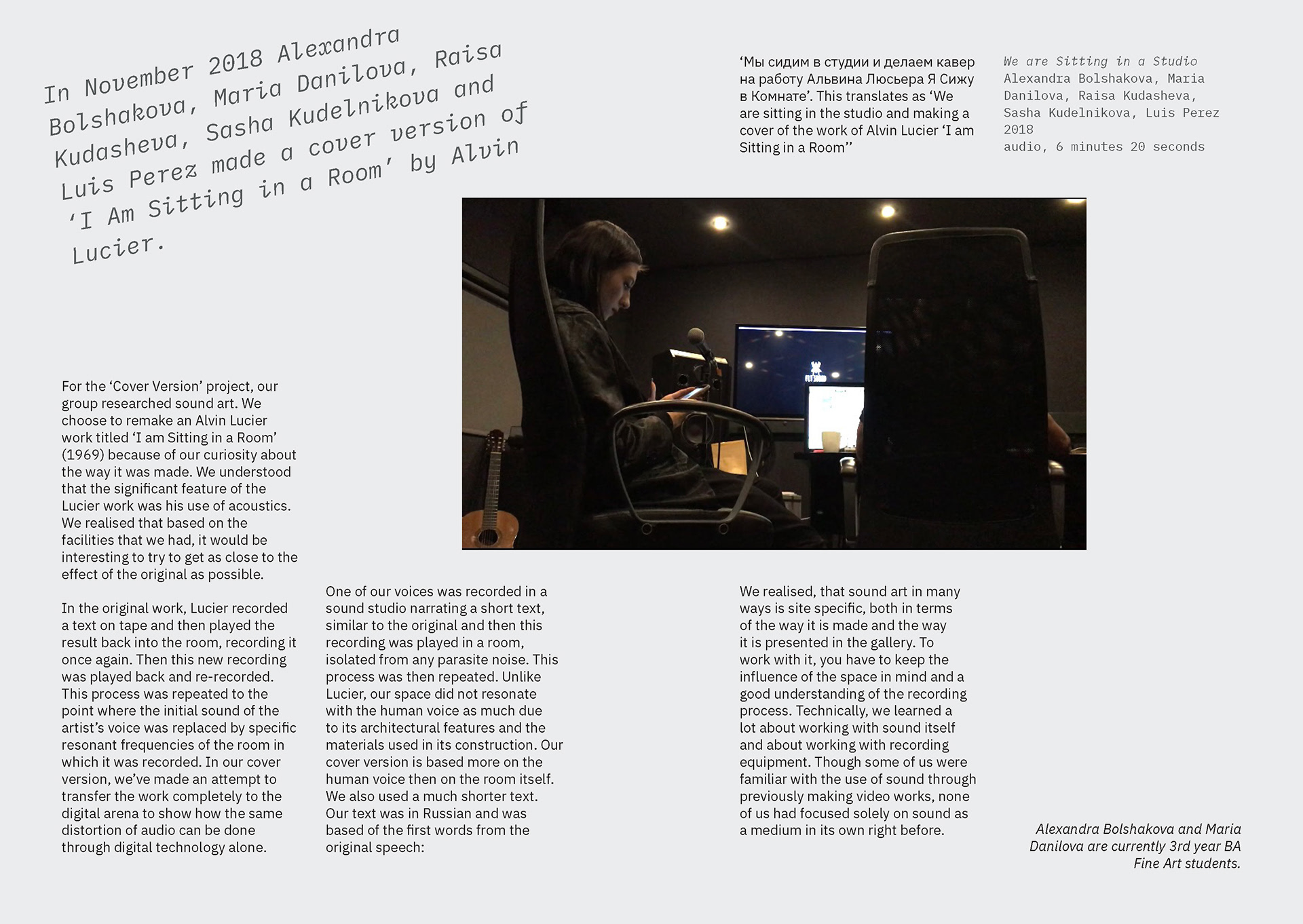 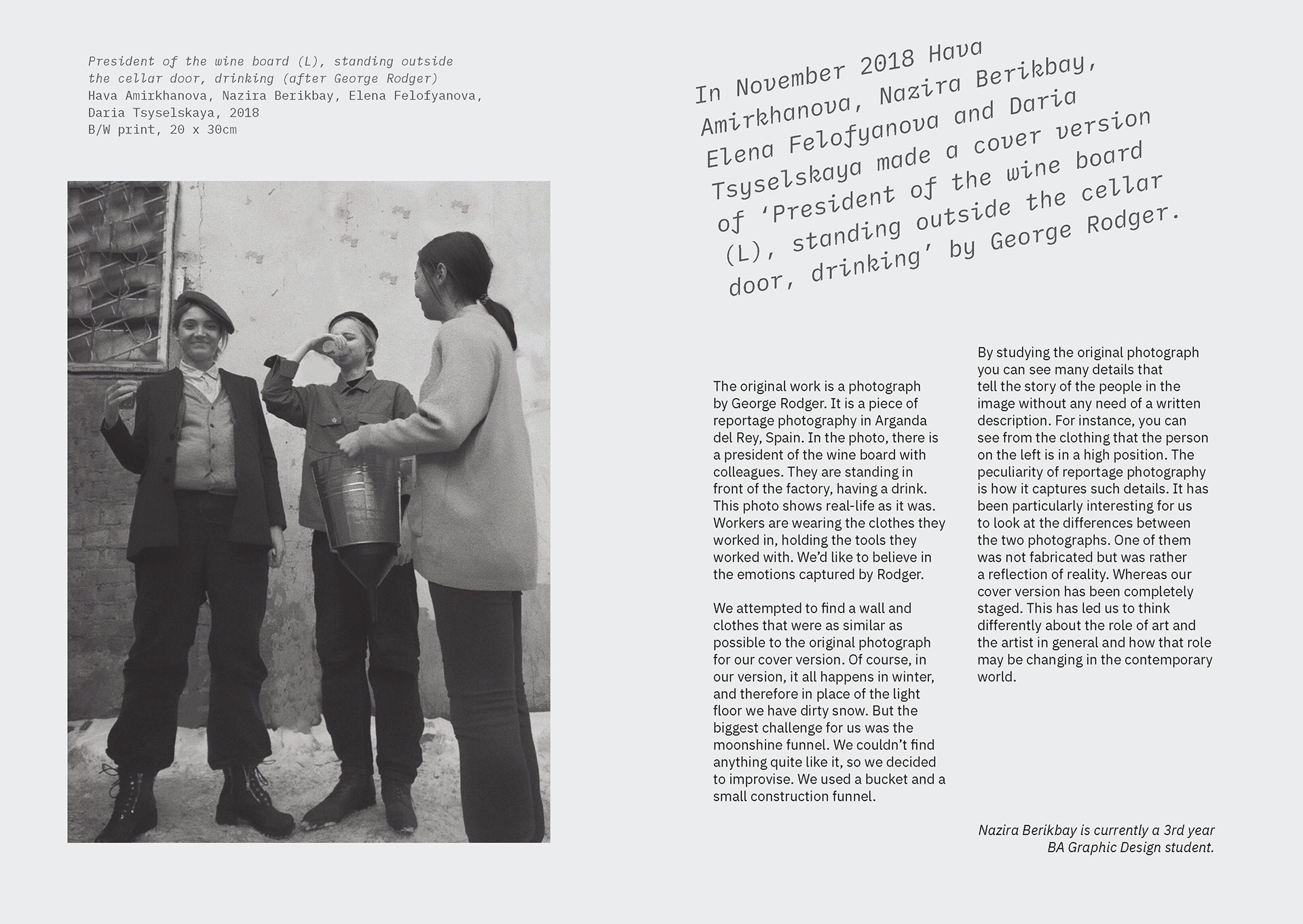 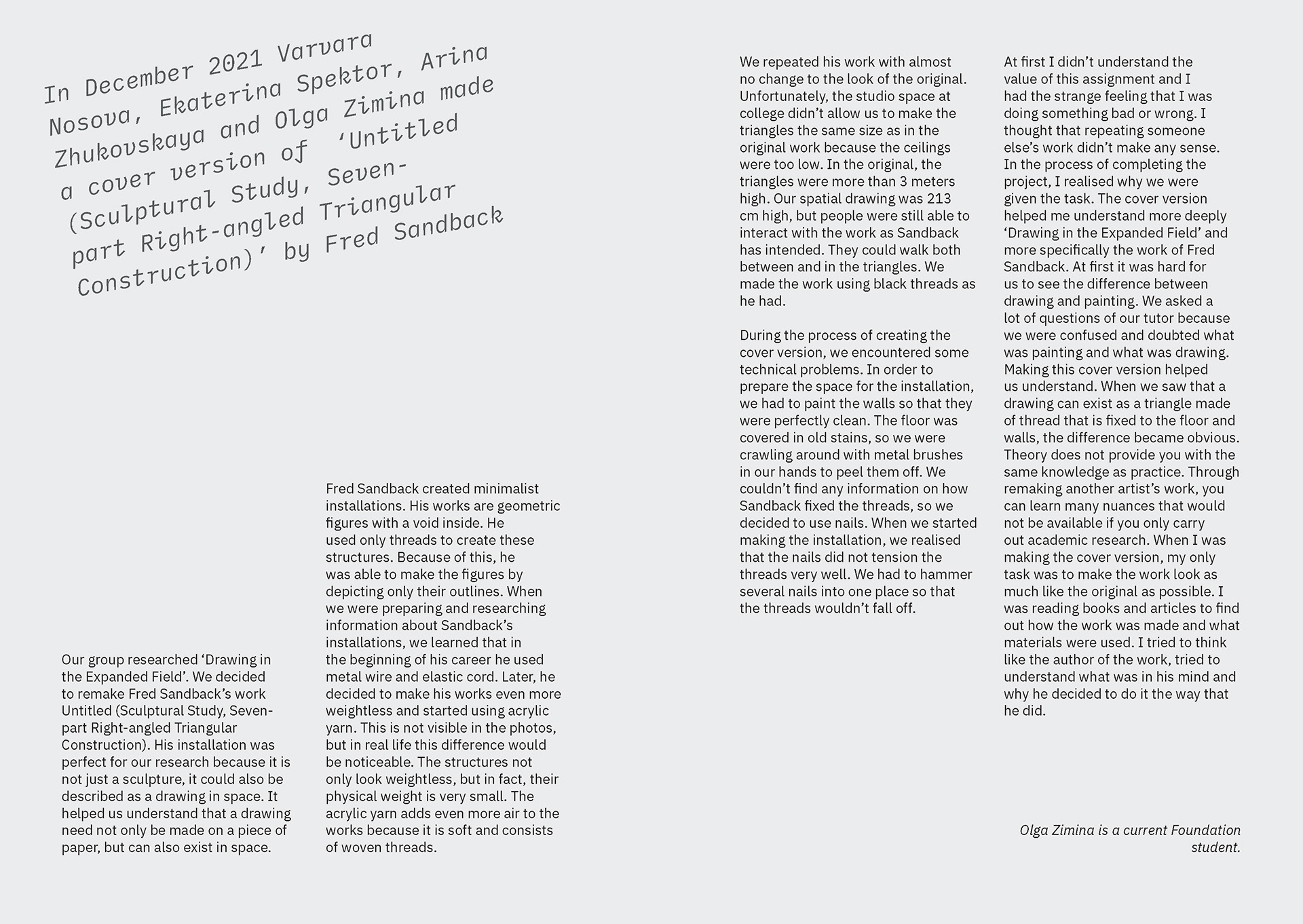 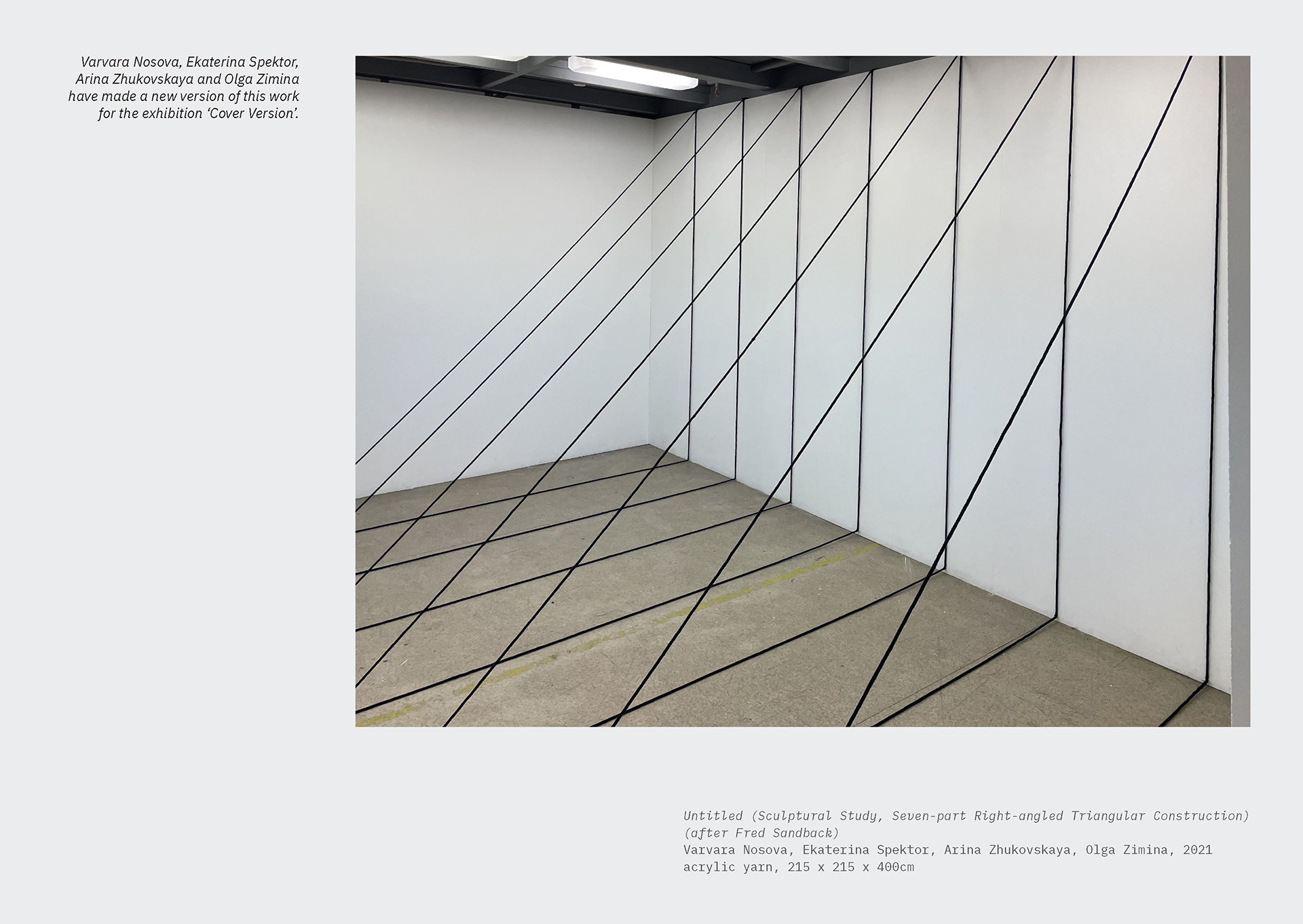 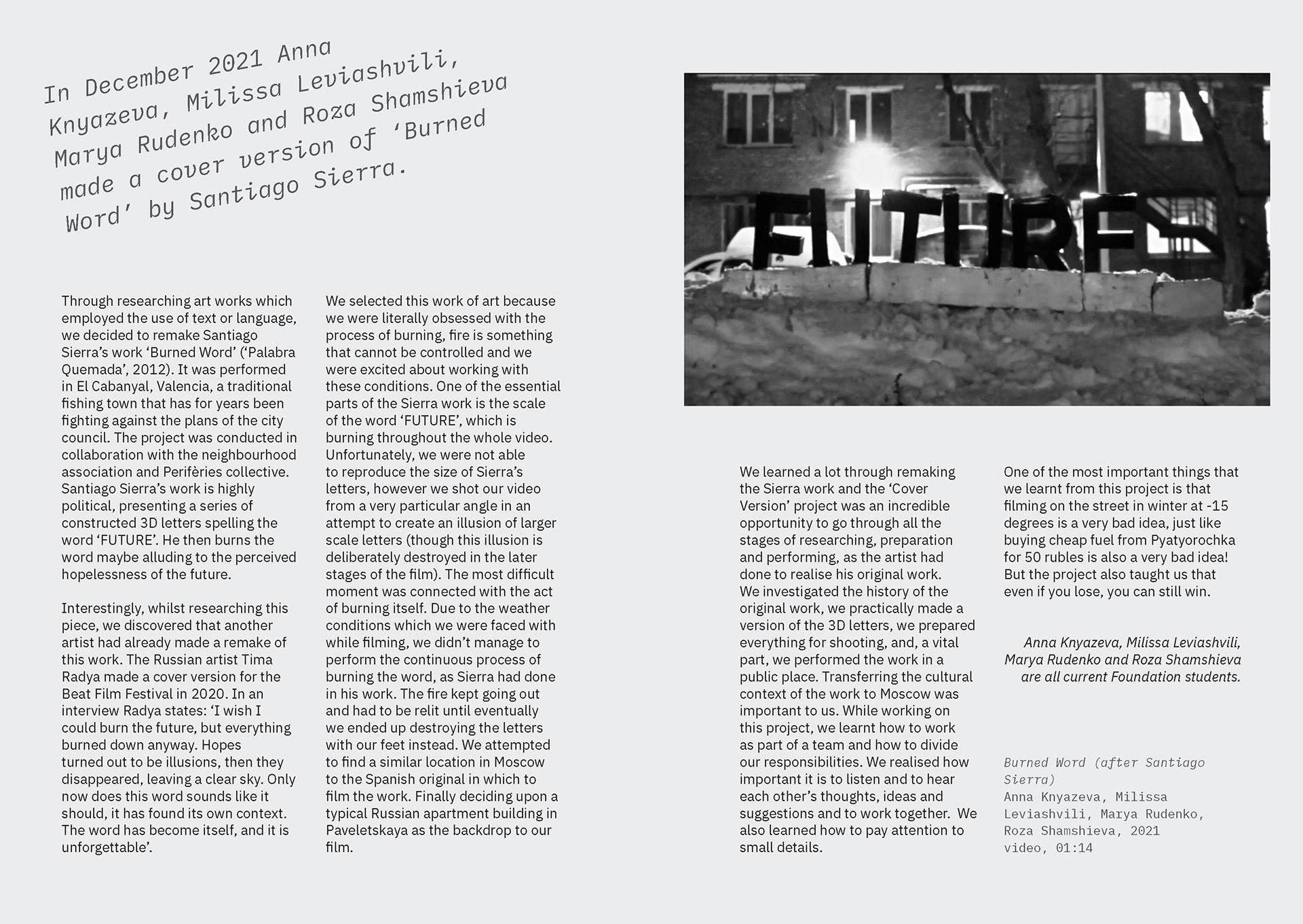 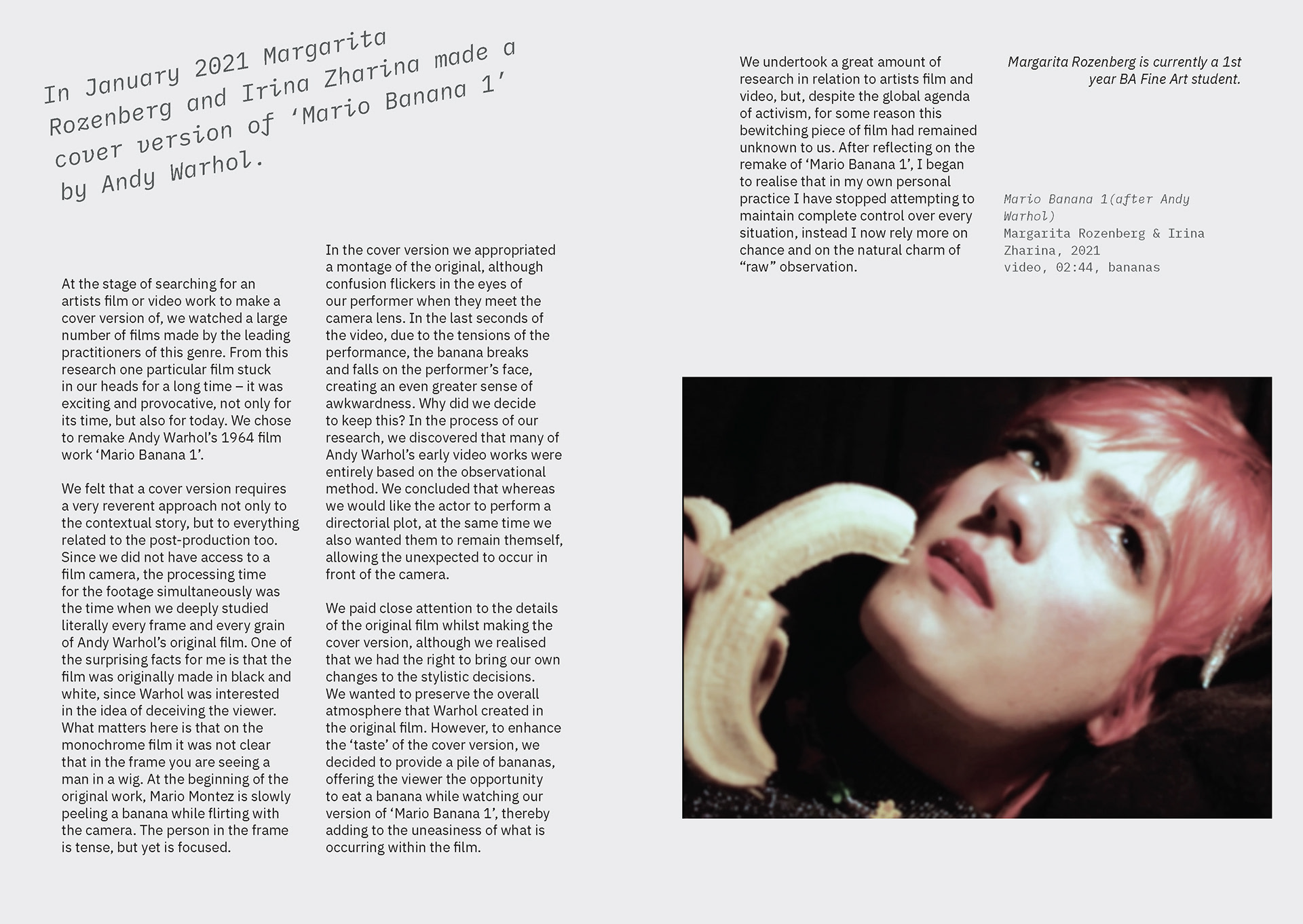 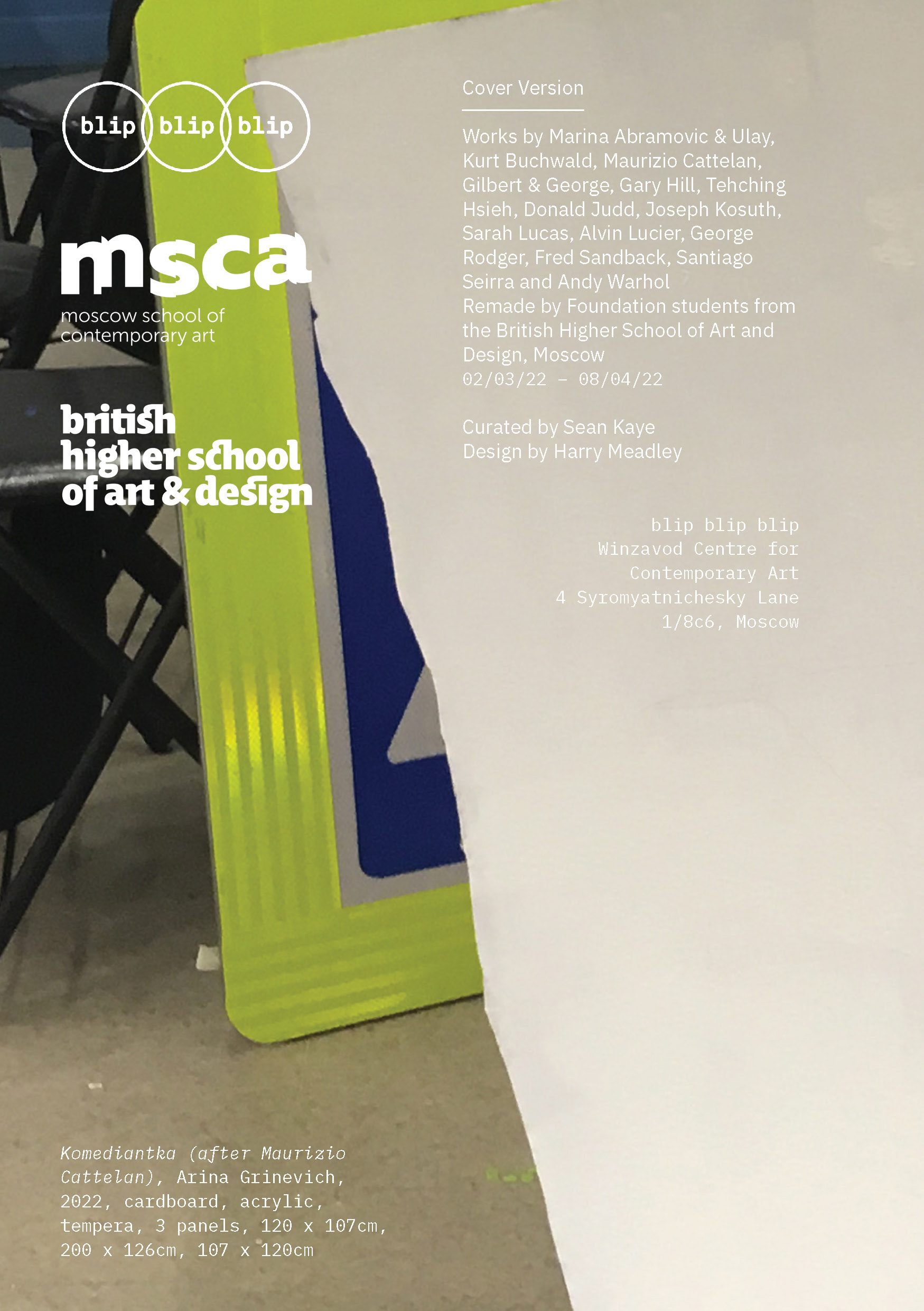