Talent Show is a project by the artist Harry Meadley that seeks to explore and question the notion of 'talent' in an art educational context. Talent is a problematic concept both in attempting to define it and in its ability to exclude. There is a reason why Talent Shows don't normally happen in art schools - but what would one look like if it did?
Working remotely with a small group of Fine Art students at the British Higher School of Art & Design, a Talent Show Committee was formed. Via a series of regular zoom meetings the Committee in dialogue with Harry Meadley set about organising a Talent Show for their fellow students to participate in – the winner receiving the chance to exhibit their work at blip blip blip.
The event itself saw only six students come forward to perform their 'talent', ranging from the satirical to the mystical, their responses included bad gymnastics, cutting paper with elongated scissors, original songs, the ability to guess the blend of fabric, tongue twisting and hand dancing; that further questioned and sought to re-define what we might consider a talent to be. Though in a twist on the night, the Talent Show Committee decided to declare all the entrants as the winners, and thus this group exhibition was formed.
Bringing together six students from a range of courses including Graphics, Illustration and Fine Art, they have otherwise been selected, not on the merits of their work (which of course does have merit) but on their willingness and courage to put themselves forward – to participate.
The exhibition of student work is accompanied by two new video works produced by Harry Meadley and the Talent Show Committee, one documenting the Talent Show event itself, and the other a recording of the final Talent Show Committee meeting.
Talent Show​​​​​​​; Harry Meadley w/ Alexandra Bolshakova, Marina Koshlina, Olga Popova, Sofya Zamanskaya, 2021; 4K video; 14:32 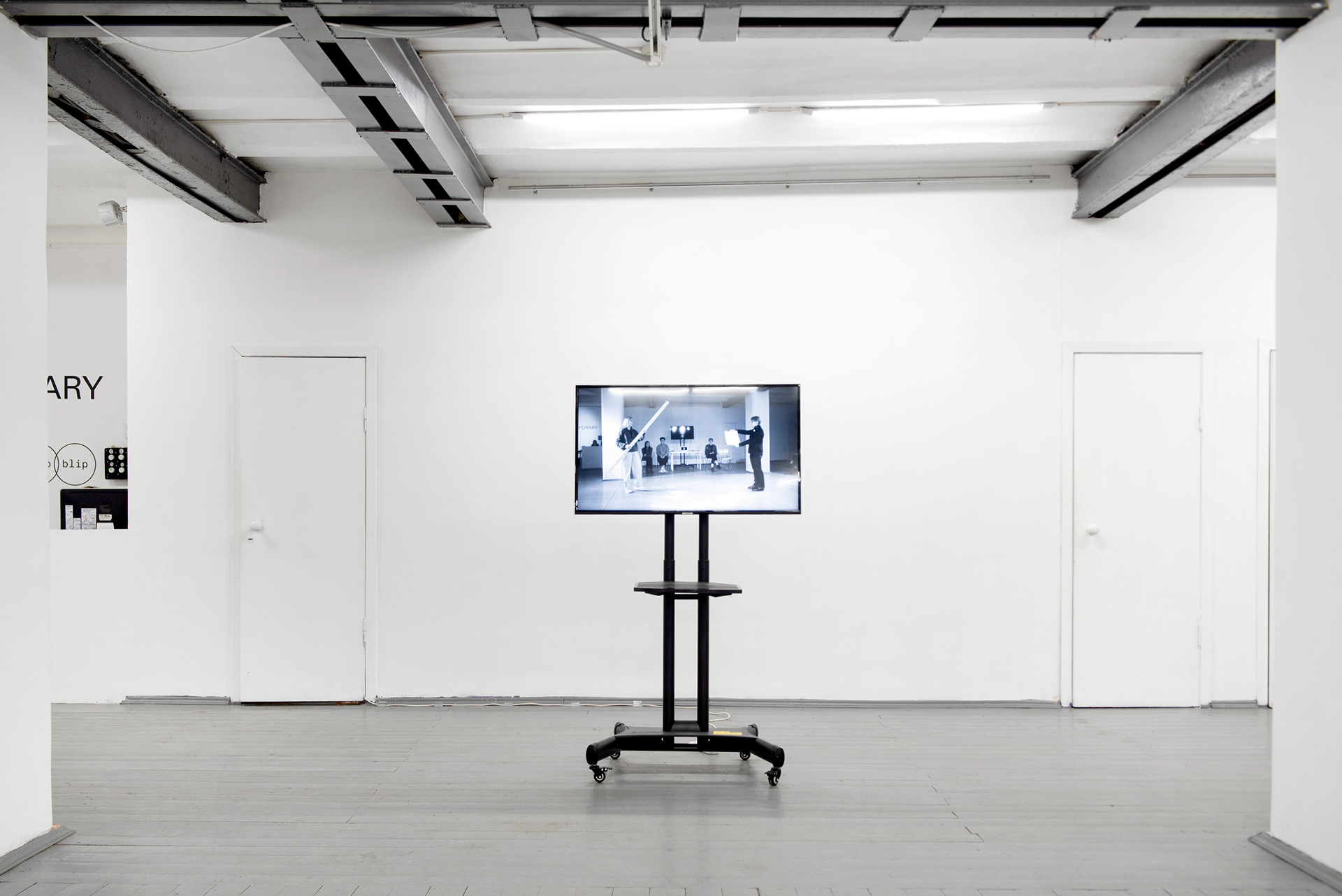 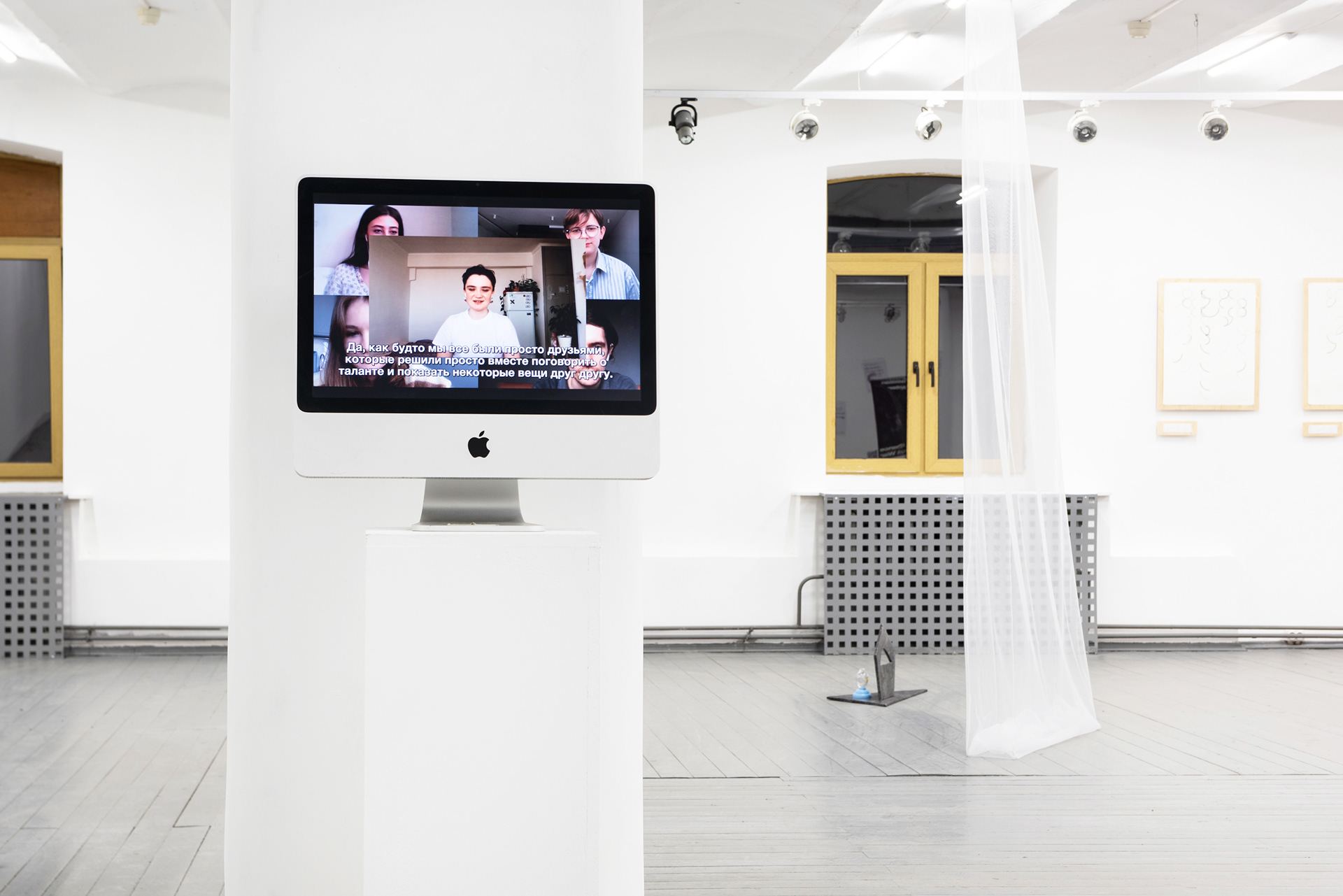 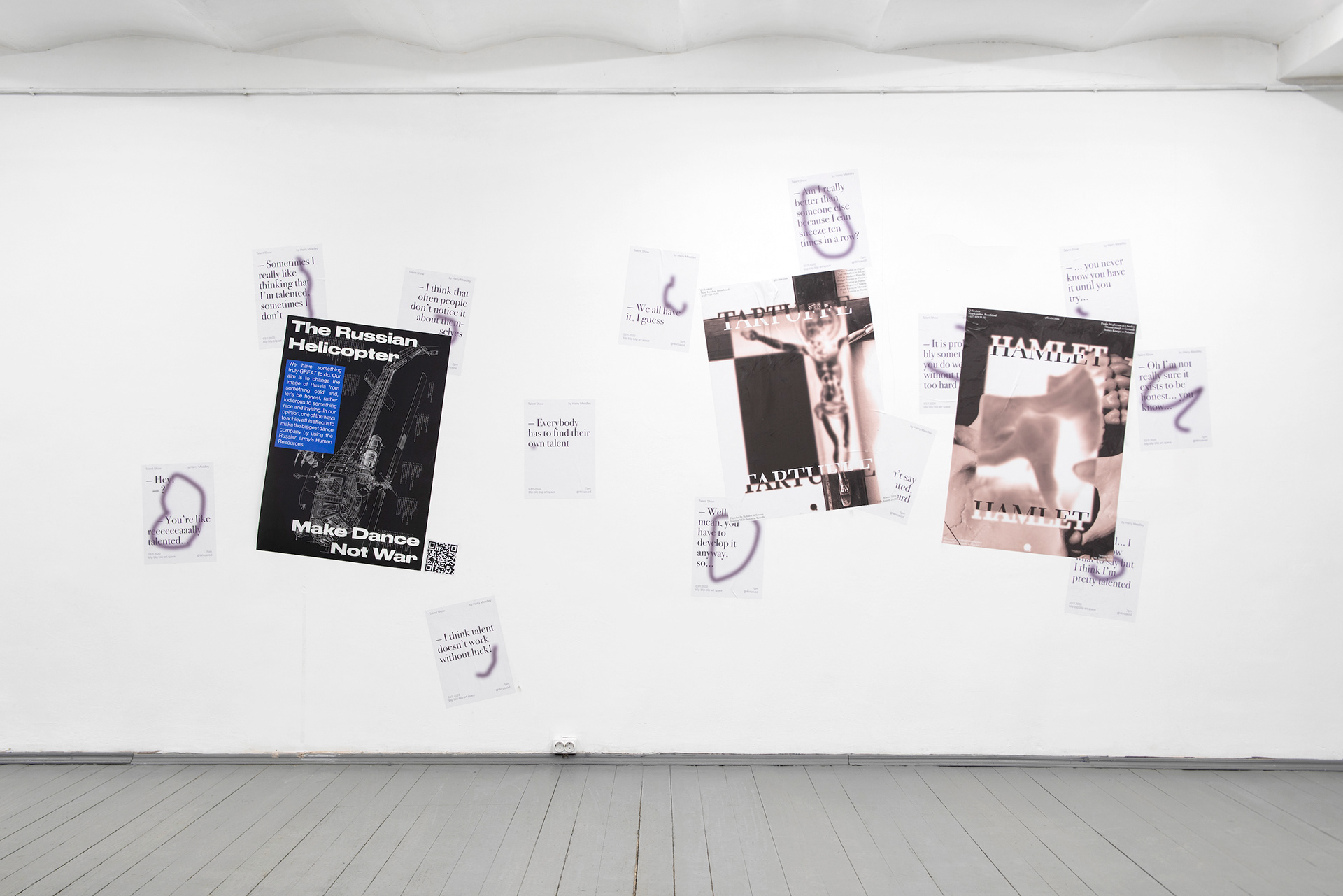 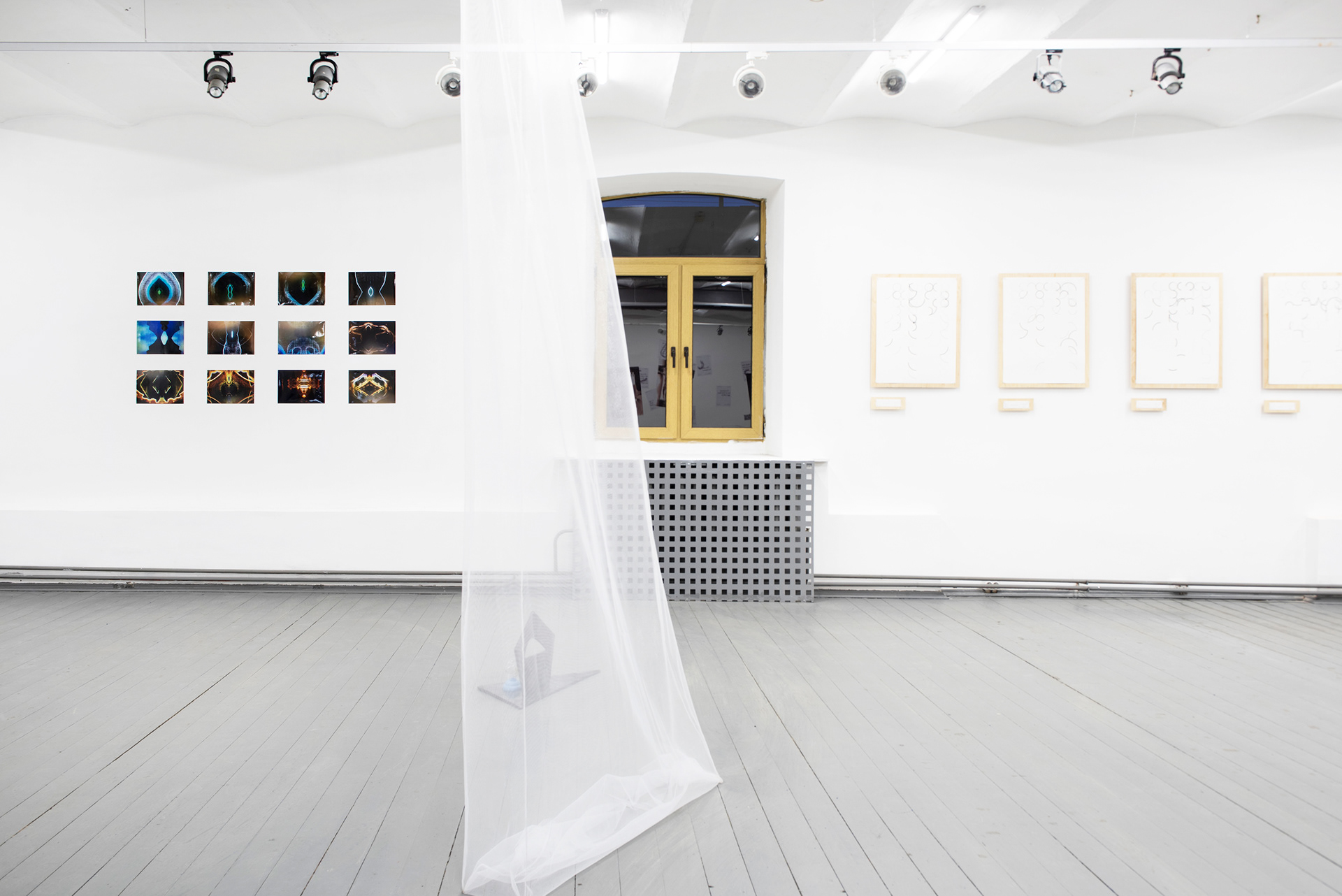 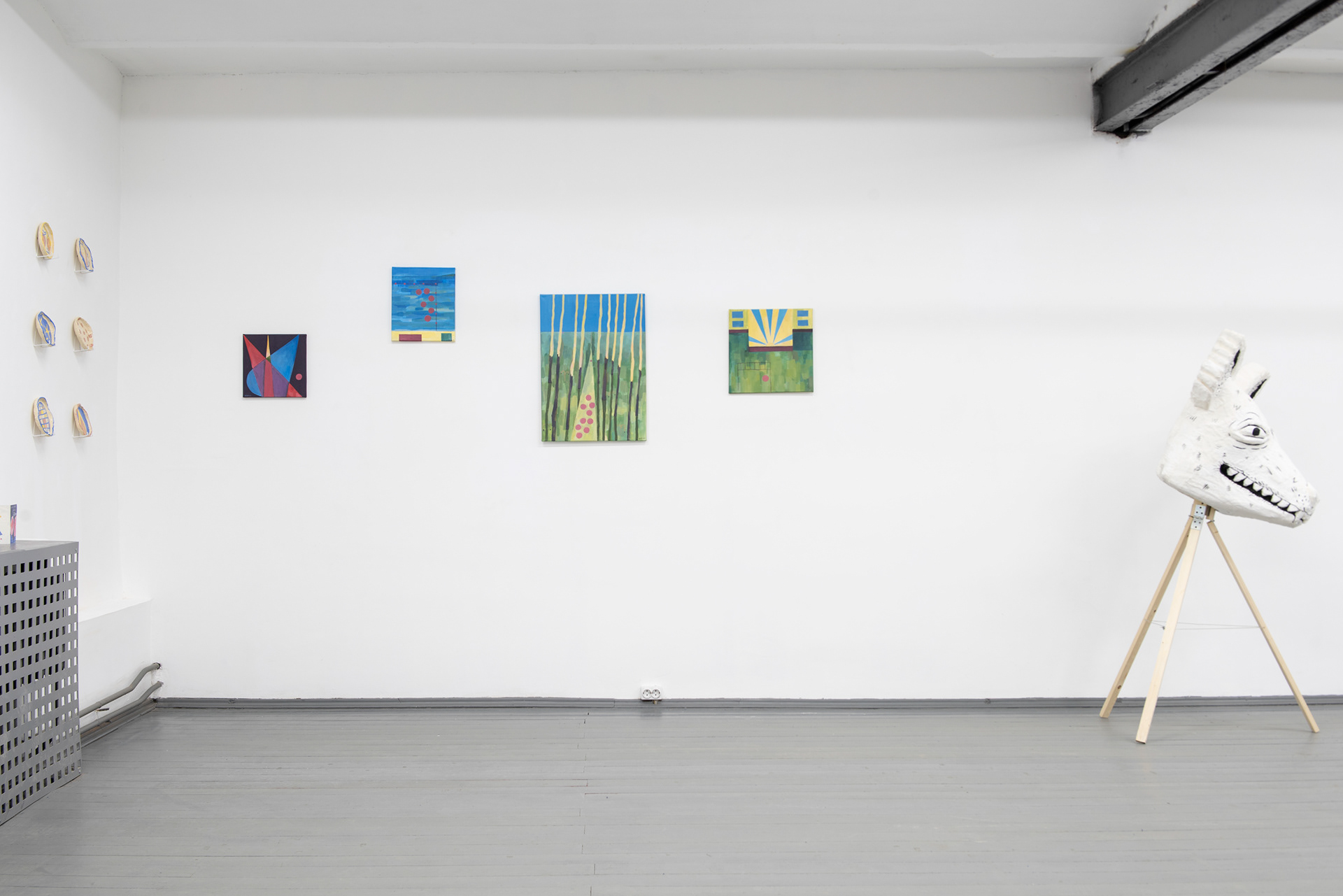 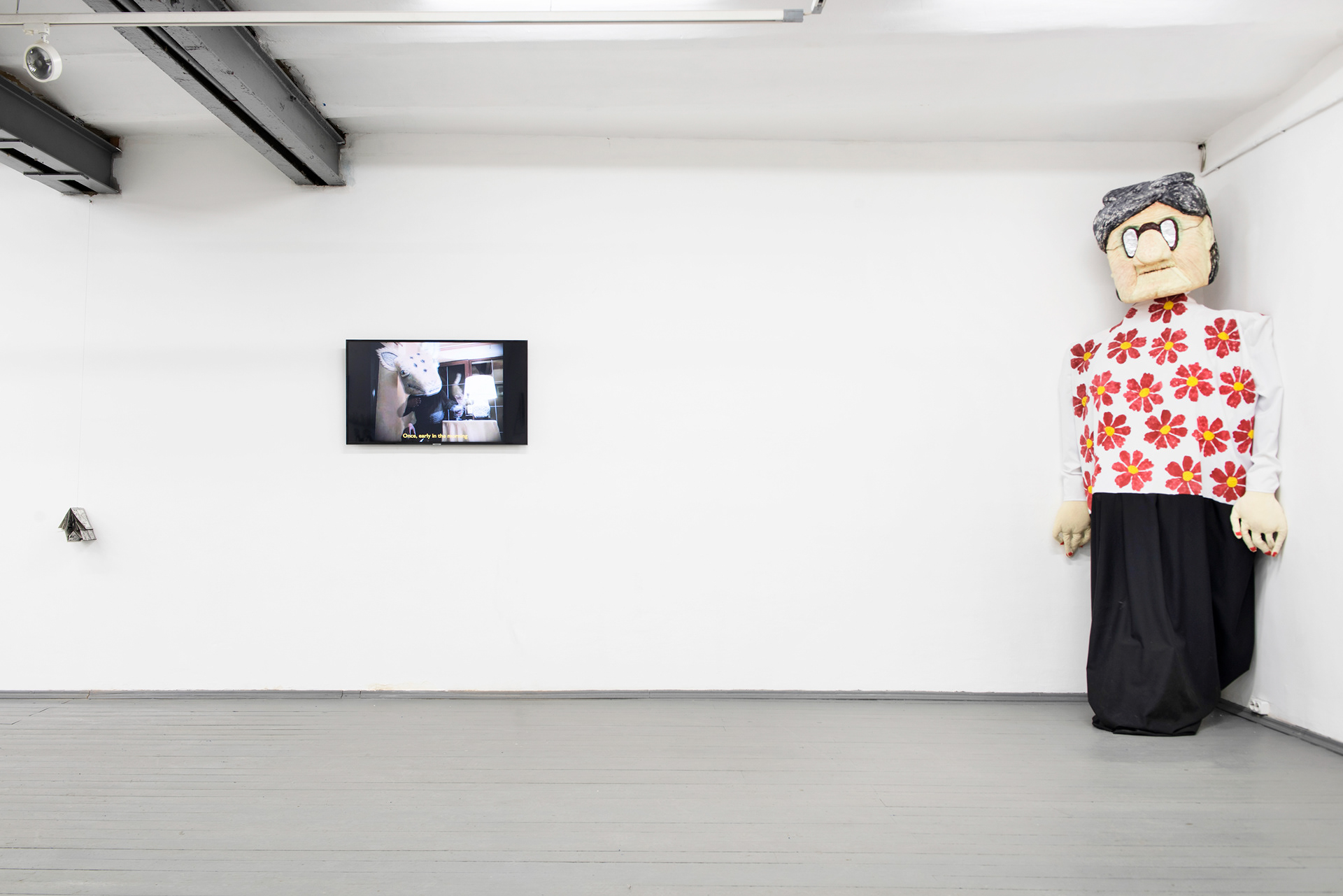 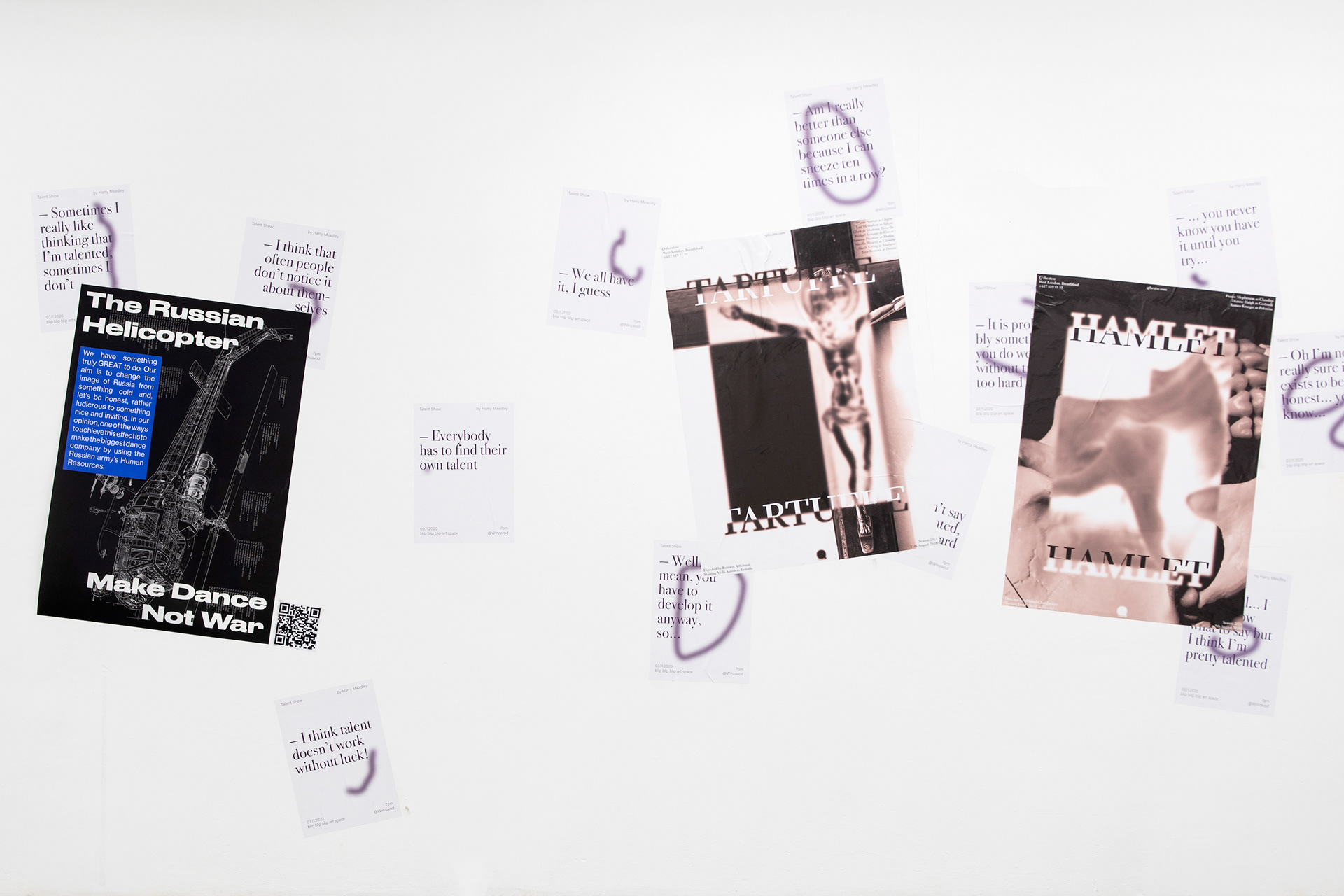 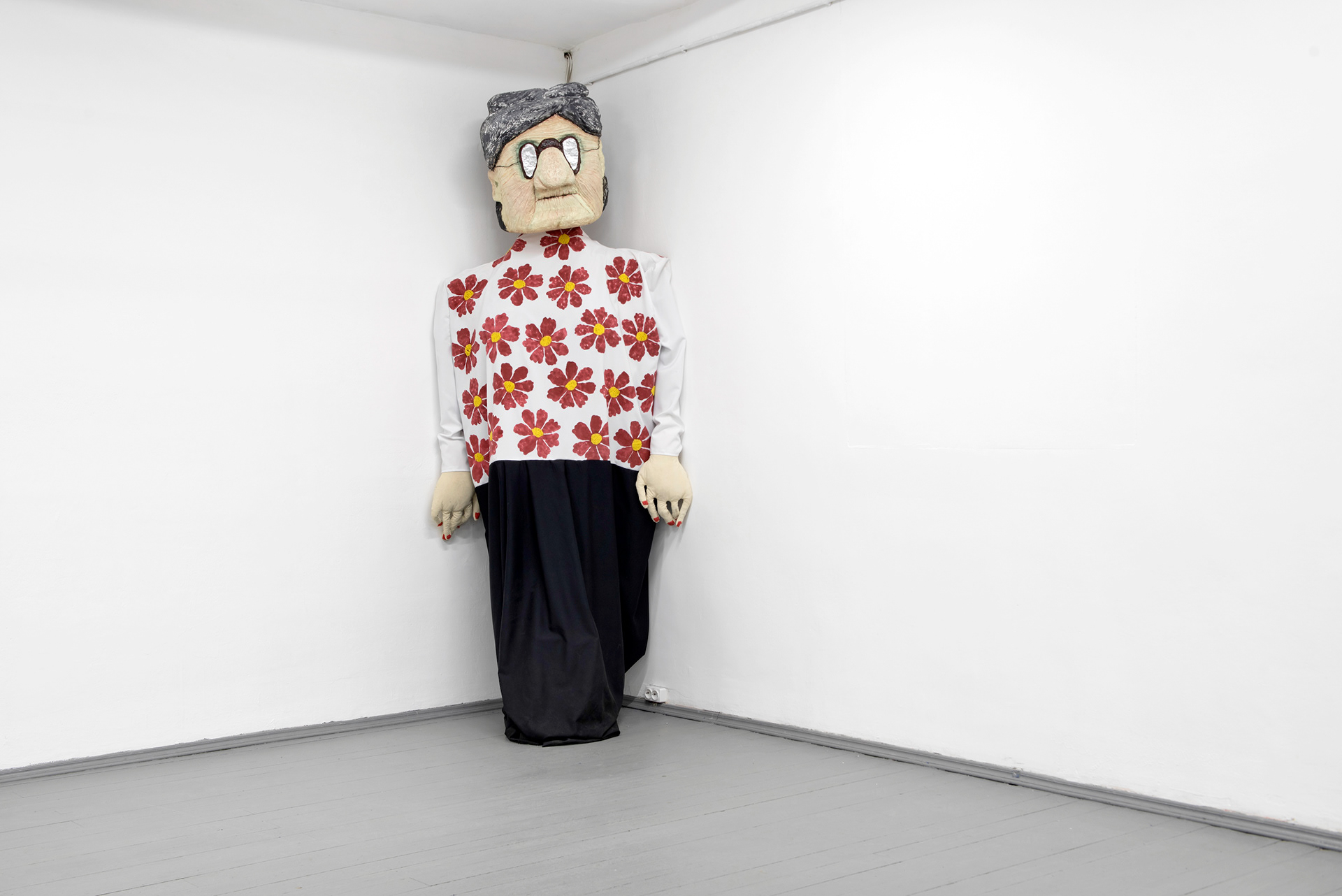 Kolobok; Dora Sidorenko, 2020; costume, projection; dimensions variable *performed every Sunday at 16.00 throughout the duration of the show 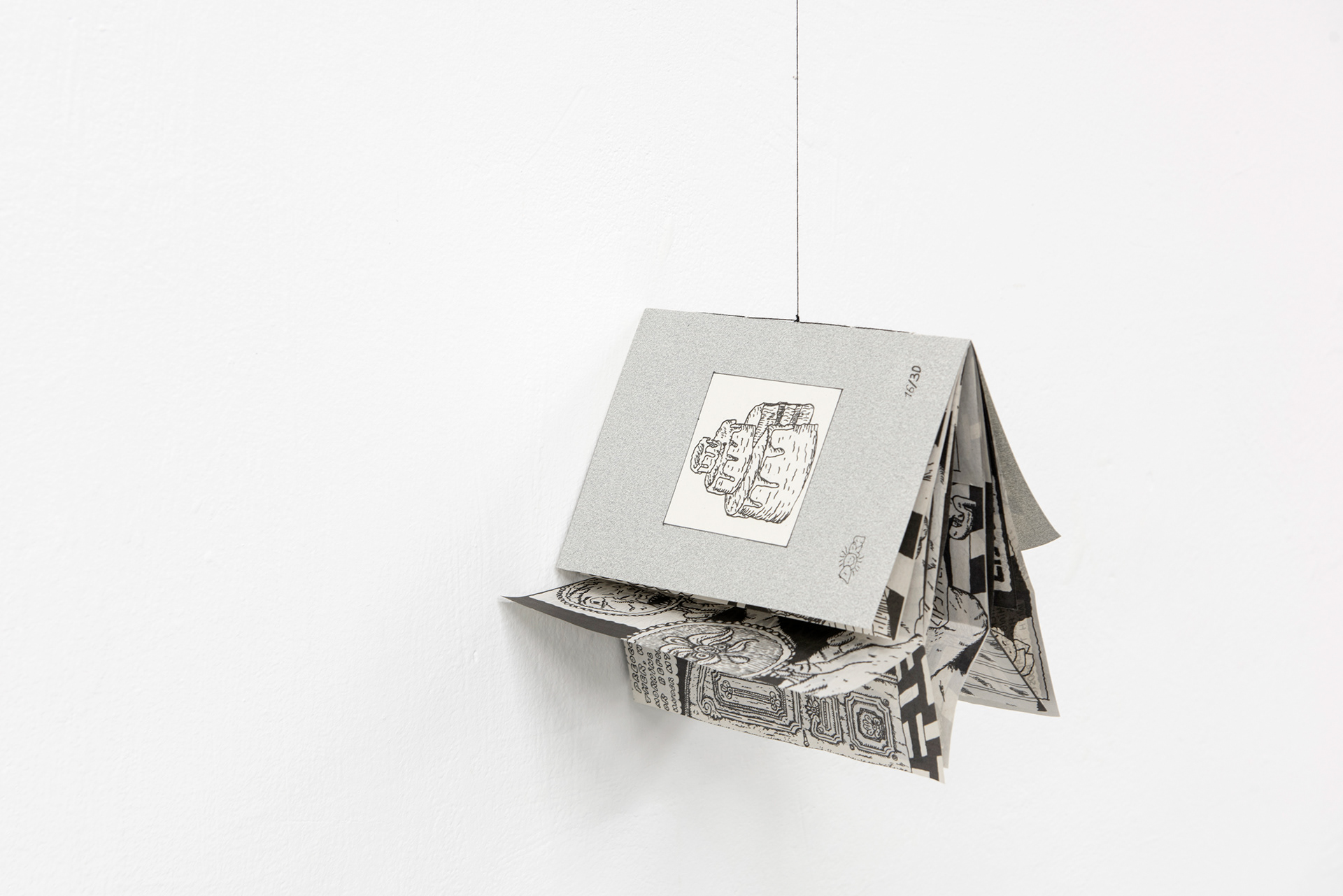 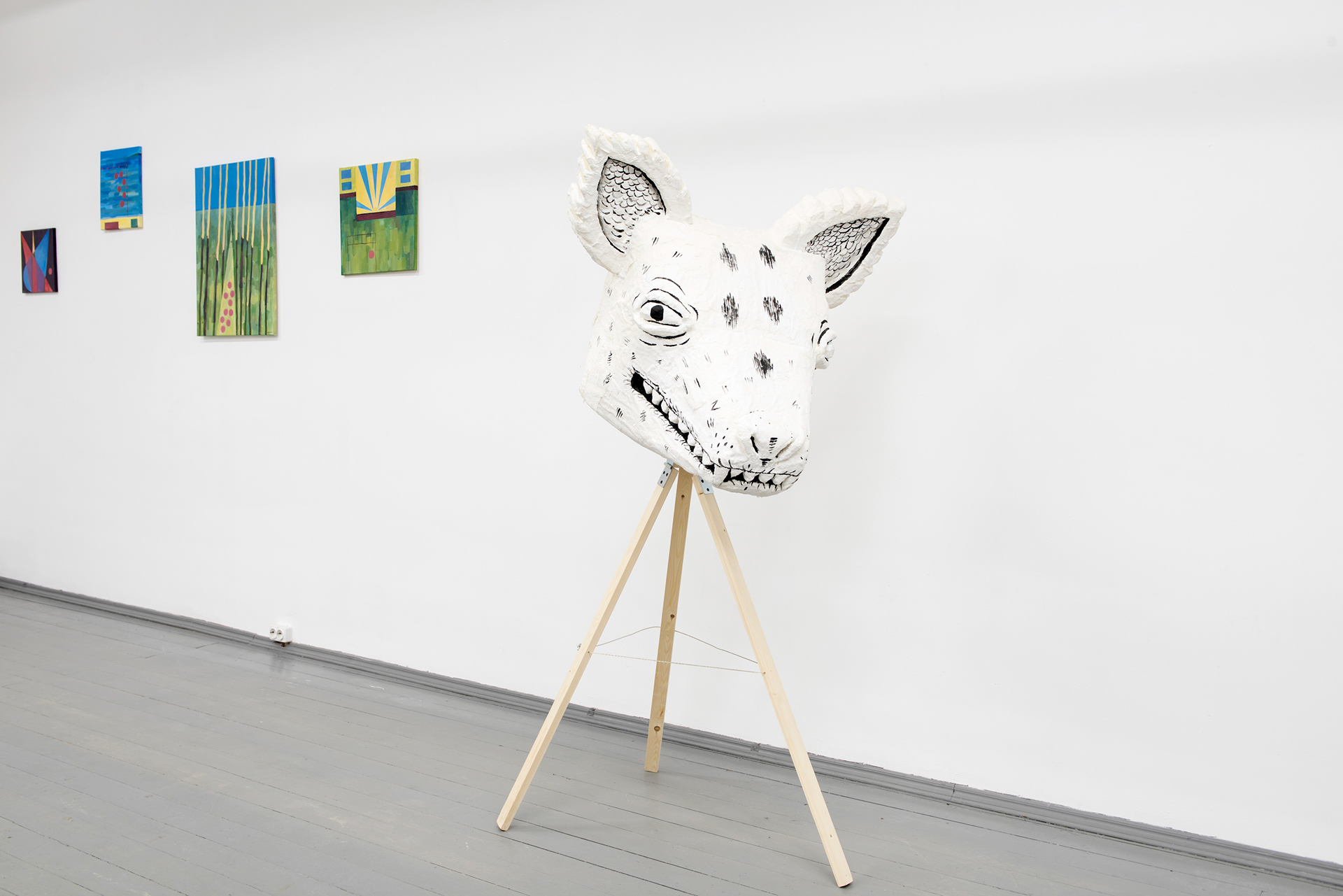 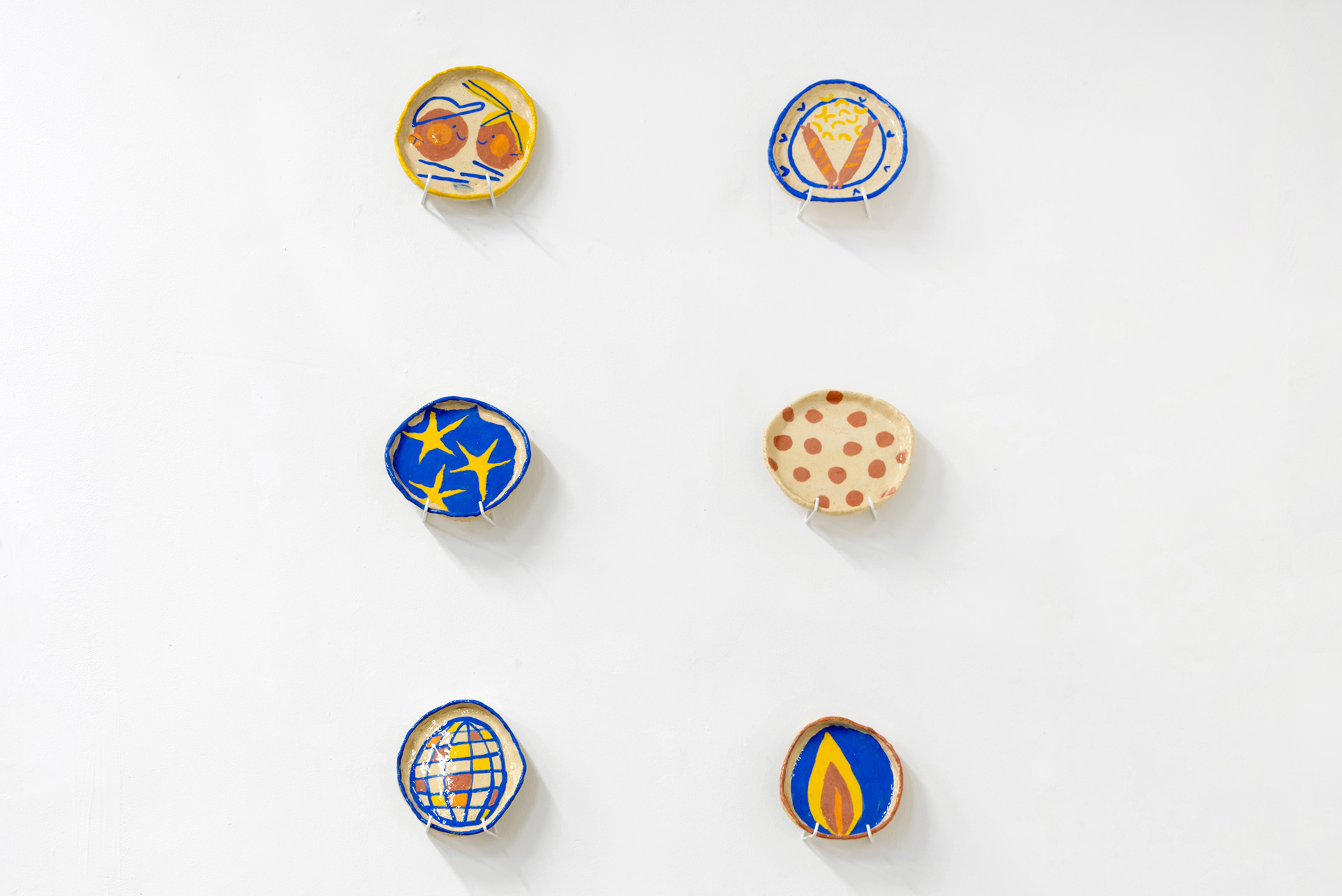 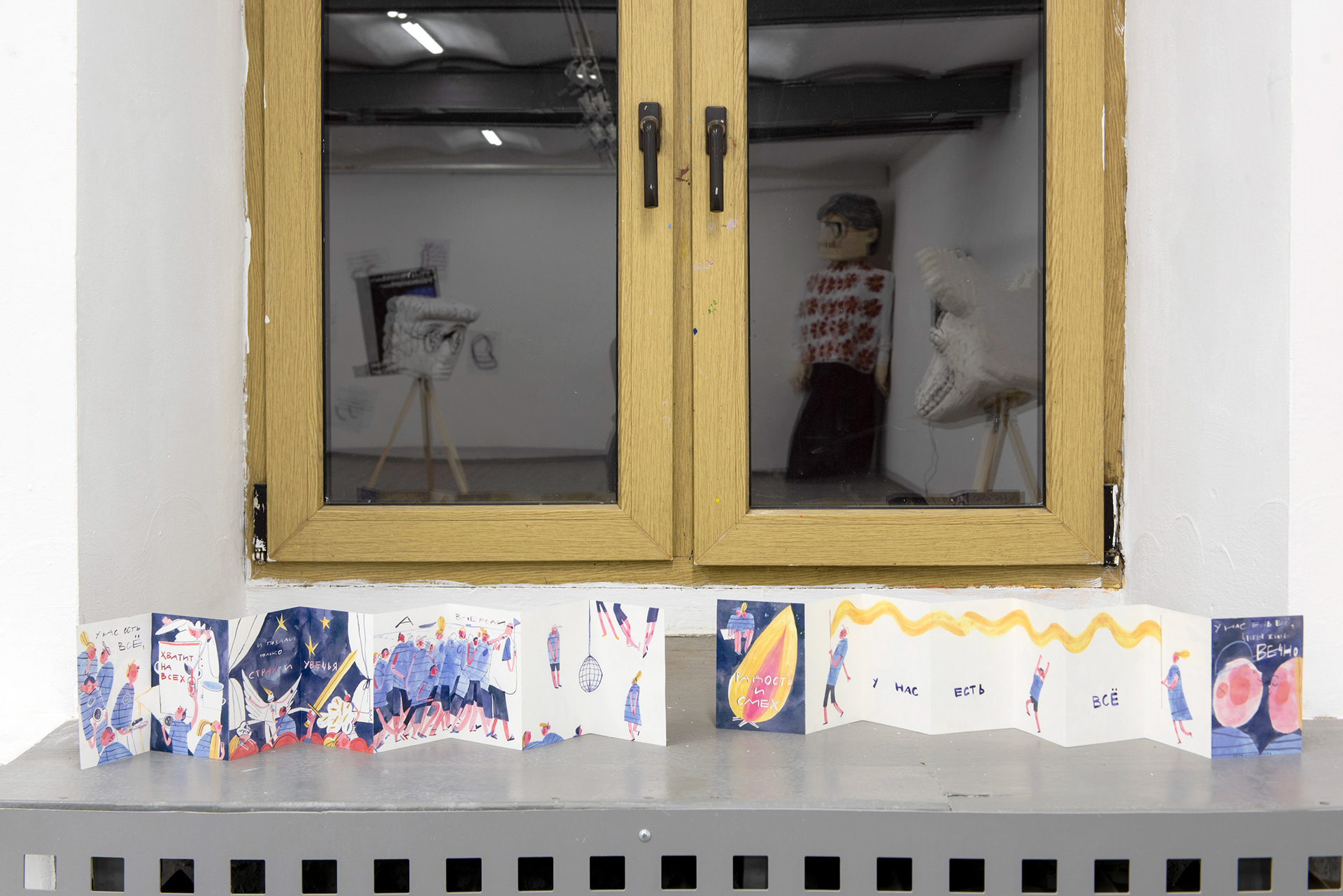 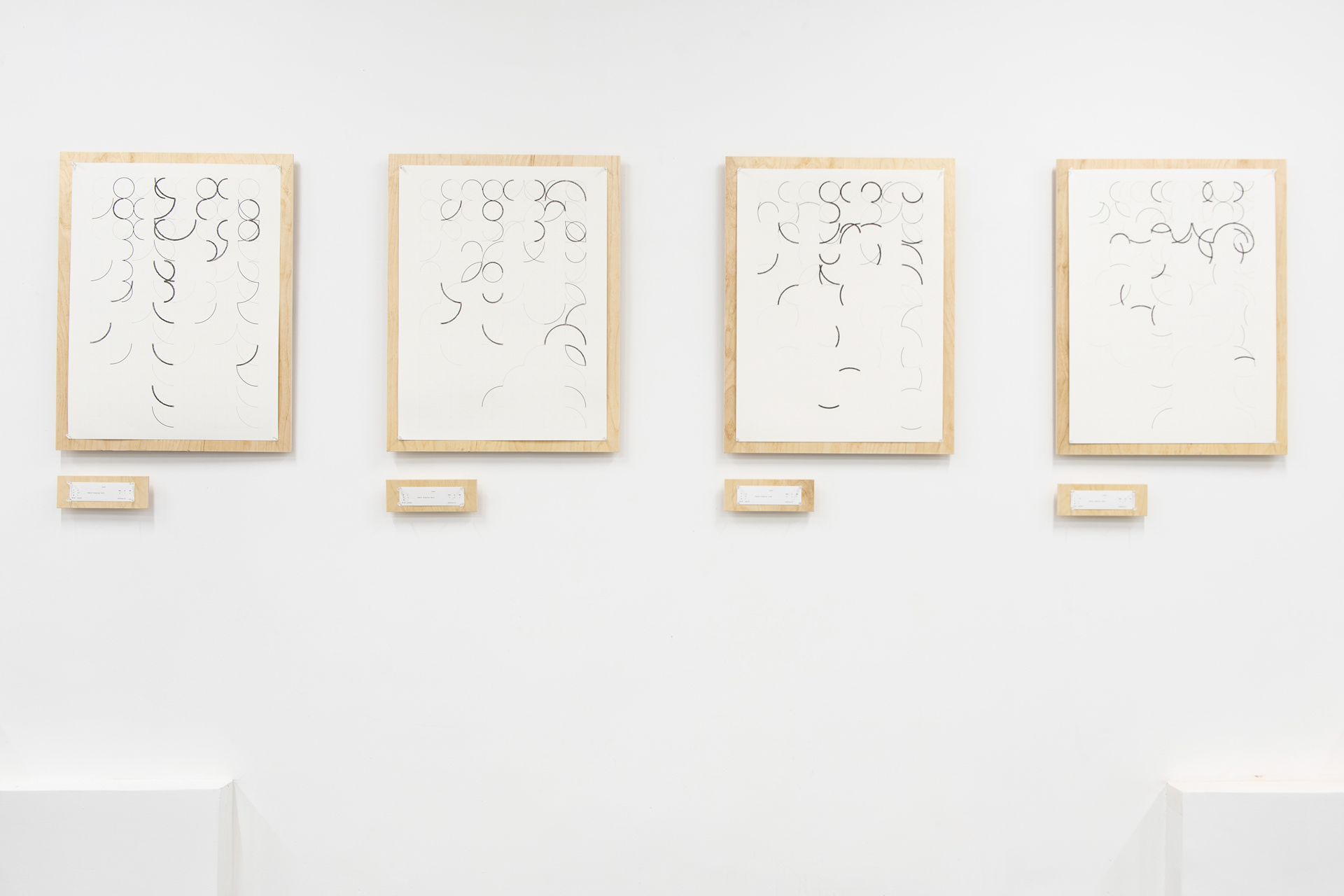 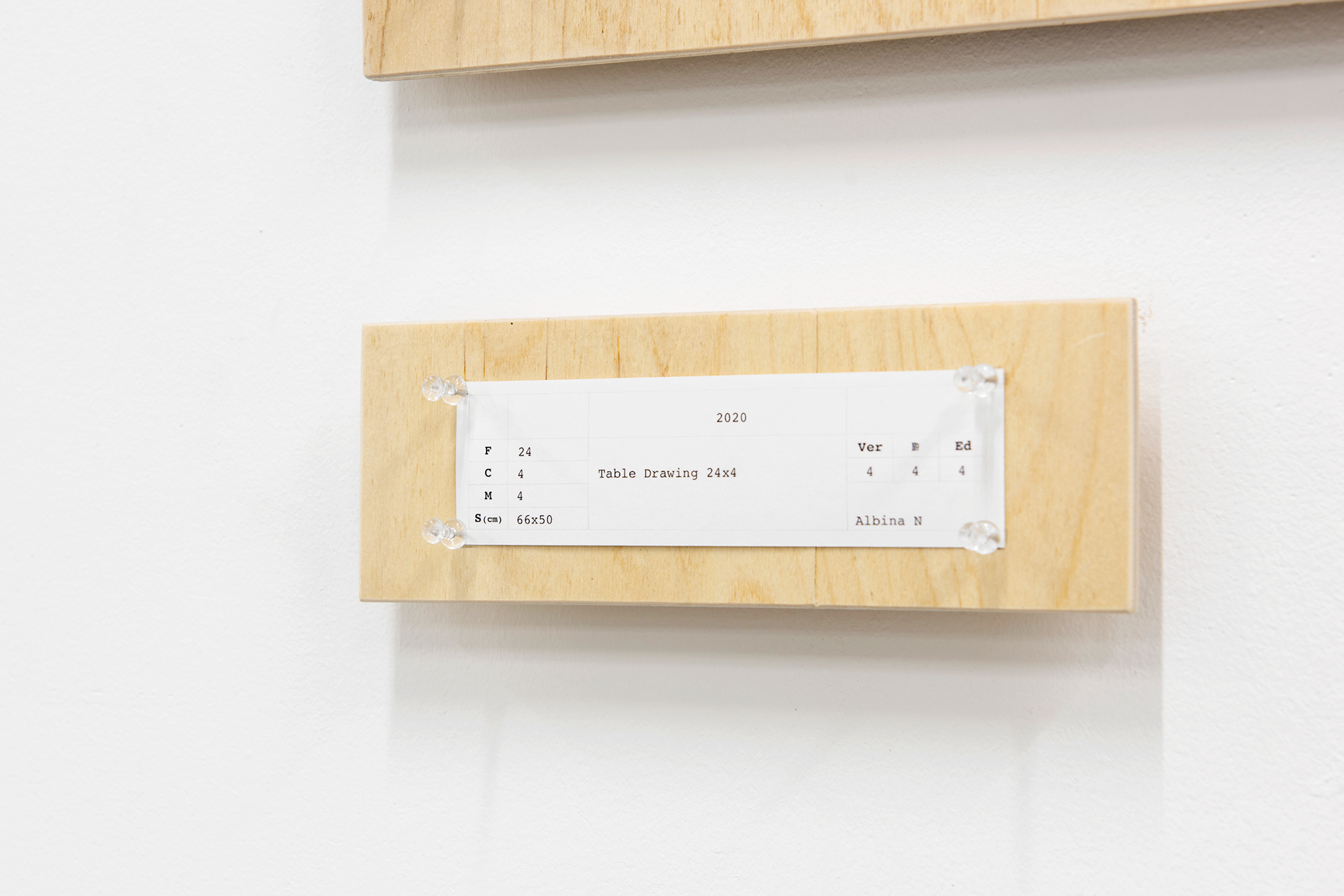 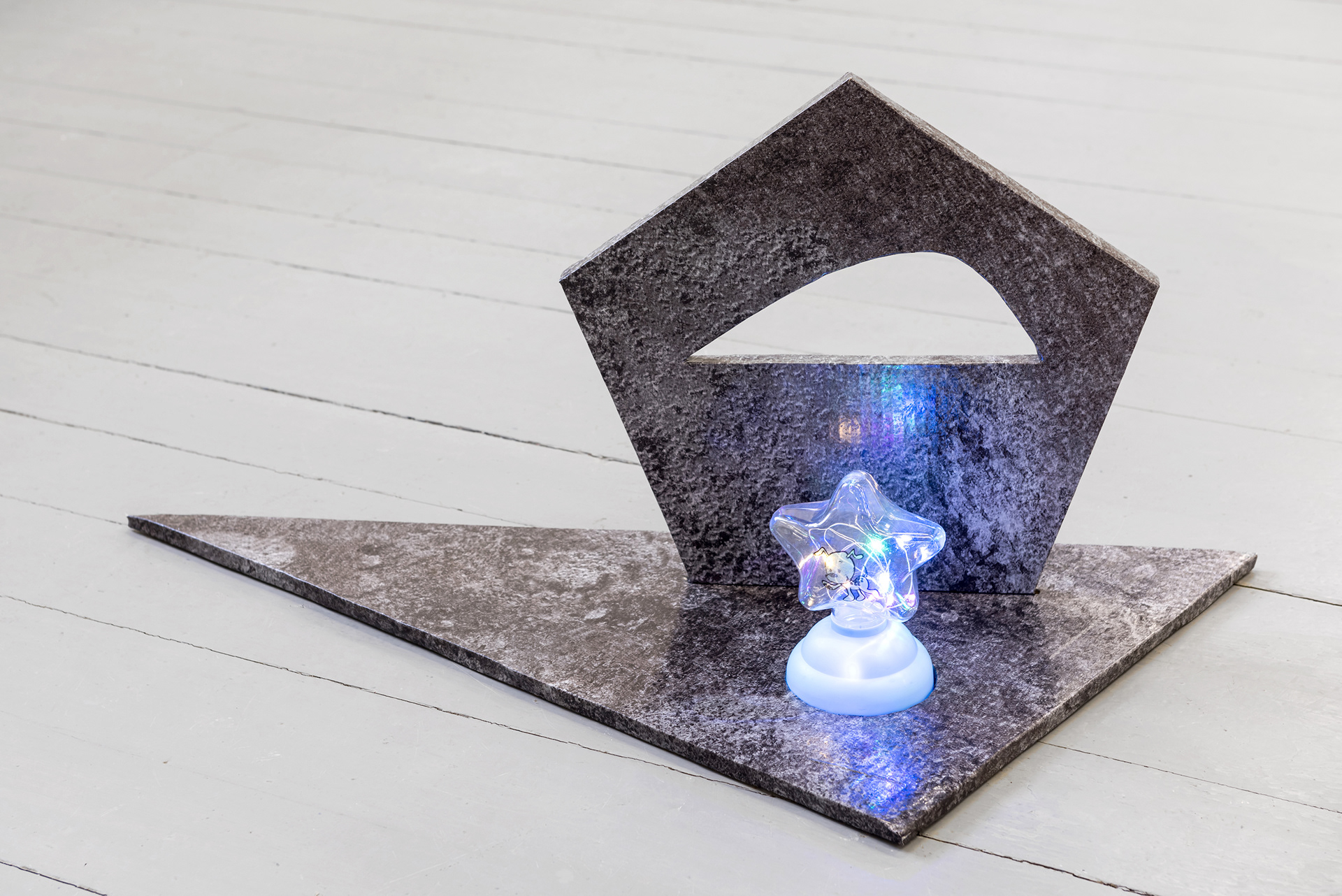 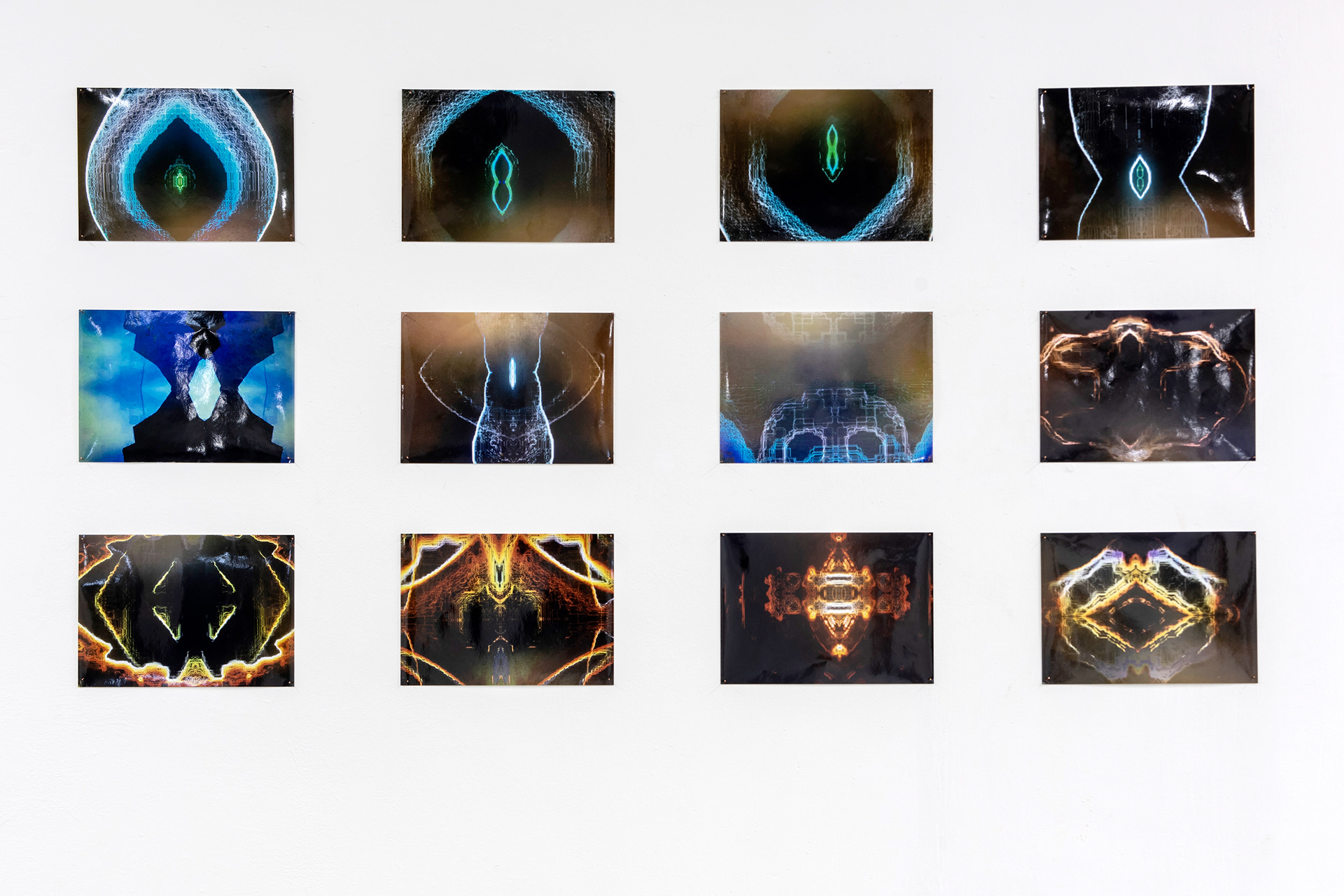 Harry Meadley is an artist born and based in Leeds, UK, who takes a conversational and co-opperative approach to art making, often working ‘on location’ within galleries, arts organisations and institutions in the development of projects that address how art operates in a social context and the exigencies of its production. Recent exhibitions include Thumbs Up, Castlefield Gallery, Manchester; But what if we tried?, Touchstones, Rochdale; recent residencies include Jatiwangi Art Factory, West Java, Indonesia; Café Tissardmine, Morocco; and ISCP (International Studio & Curatorial Programme), New York.
The Talent Show Committee members are Alexandra Bolshakova, Marina Koshlina, Olga Popova, and Sofya Zamanskaya. In return for their work putting together the Talent Show event and this exhibition; Harry Meadley will support the realisation of a project of theirs whilst undertaking a residency at Newlyn Art Gallery and The Exchange, Penzance, UK, this coming summer.
Nazira Berikbay is interested in telling fictional stories by producing posters, websites, and social media profiles such as an ongoing petition to form a dance company with the Russian Army’s Human Resources department.
Alexey Bobrov will be presenting a new series of photographic works.
Maria Istomina is now on the way of establishing her personal practice which is mainly based on videomaking and moving-images. However, her practice also includes sculptures and site-specific works which will feature in this exhibition.
Valerya Milovanova is an artist and illustrator mainly working with books, such as a recent project that consists of associations with a song by SBPCH (СБПЧ) and connects them to personal memories of summer camps, first love and friendship.
Albina N works primarily with drawing and performance to explore ideas of the system, structure, algorithm, and instruction-based works.
Dora Sidorenko creates comic strips and transforms characters and stories into new mediums through installation and performance. In her practice she explores folklore in a context of contemporary Russia. Performances of her work will take place during the exhibition opening and throughout the duration of the show.

On Wednesday 31 March at 6pm (GMT), the BHSAD in Moscow is hosted a panel discussion in conjunction with the exhibition Talent Show by Harry Meadley. The show explores and questions the notion of ‘talent’ in an art educational context. Talent is a problematic concept both in attempting to define it and in its ability to exclude. The panel was chaired by Magnus Quaife, Professor of Fine Art Pedagogy at The University of the Arts, Helsinki. Magnus was joined by the artist Harry Meadley, a lecturer in BA Fine Art at Leeds Beckett University; John Seth, 4D Pathway Leader, BA Fine Art, Central St Martins, London; Annie Davey, lecturer in Art Education at UCL, Institute of Education, London.